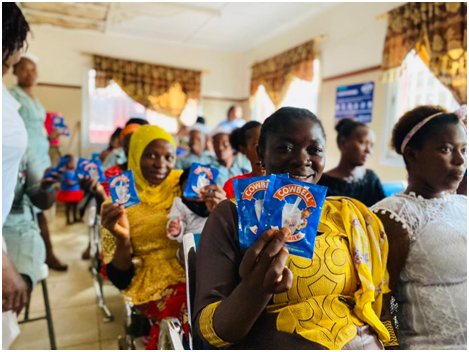 As part of efforts to raise awareness about the importance and benefits of quality milk consumption in the country, for the second time in the history Sierra Leone, Premium Divine Trading Company Ltd, a food distribution company that operates as an agent for Promasidor, a leading supplier of quality food products to more than 30 African countries, including Sierra Leone, joined the world to commemorate World Milk Day which is an international day established by the Food and Agriculture Organization (FAO) of the United Nations to recognize the importance of milk as a global food. It has been observed on June 1 every year since 2001.

This was executed by extensive milk education and making available dry samples of cowbell powdered milk as well as wet samples of cowbell coffee for lactating mothers and pregnant women in all the hospitals they visited to enjoy.

Speaking on behalf of the company, Country Manager of Premium Divine Trading Ltd, Kenneth Konuah disclosed that World Milk Day is observed every year on the 1st June to recognize the importance of milk as a global affordable nutritious food, adding that the main
objective of the day is to focus on increasing awareness about the benefits of milk as a nutritious product for consumption by all and sundry which, he said, was established by the Food and Agriculture Organization (FAO) of the United Nations in 2001.

He intimated that Premium Divine Trading, as a responsible company, thought it fit to embark upon this exercise in order to join the world in commemorating the day through massive education or awareness creation on the importance and benefits of milk to lactating mothers and pregnant women, adding that during the process they educated lactating mothers and pregnant women on the significance of consuming
cowbell milk which she said is a rich source of protein, calcium and vitamins A, B, C, D E and K otherwise referred to as Vitarich.

Kenneth Konuah intimated that the theme for this year’s World Milk Day is focused on “Dairy Net Zero” and that this means that the day aims to reduce greenhouse gas emissions by the dairy industry over the next 30 years.

He informed all that Cowbell products comes in 14g sachet, 20g sachet, 360g sachet and 400g tins for the milks. Also, cowbell food drinks package sizes are 40gs for the Coffee, Strawberry, Coconut, Choco-Malt and Cowbell Mocha. They are all produced in Ghana by
Promasidor Ghana Limited for export sales to some West African countries including Sierra Leone.

He concluded by saying that as a company they can guarantee the availability of quality milk for consumption by everyone with Cowbell Milk, adding that they are doing so to discourage the use of unsafe milk products on the market which she said is not good for lactating mothers, children and pregnant women.

Speaking to this medium, Isatu Kamara a lactating mother who benefited from the milk education and the sampling of cowbell milk commended
Premium Divine Trading Company Ltd for the laudable venture in reaching out to hospitals with milk education describing such as very important towards the development and growth of their children.

She encouraged all lactating mothers to buy Premium Divine Trading Company Ltd products especially Cowbell Milk which she said will support their children to grow well.

“After giving your babies 6 months breast feeding allow give your child Cowbell Milk will not regret as their products have the required nutrients and they are of high quality,” she maintained.

On her part, the Nutritionist for 34 Military Hospital, Zainab Bangura, commended the Premium Divine Trading Company Ltd for the laudable venture in educating lactating mothers and pregnant women on
the significance of consuming quality milk which she said is very important towards the proper growth of them and their babies.

She informed lactating mothers that milk is very important for the
growth and development of their children, but further encouraged them to give their babies 6 months exclusive breast feeding and after which they can now give them milk of which she recommend Cowbell milk which she said has all the nutrients for the proper growth of their babies.

The Matron for Aberdeen Women’s Centre, Jeneba Bockarie also expressed gratitude to the company for the impressive venture towards the massive milk education and sampling to lactating mothers and pregnant women which she described as a move in the right direction towards educating them on the importance of using quality milk for their babies after 6 months exclusive breast feeding.

During their visit to these facilities the company distributed 2 pack of Cowbell milk to all lactating mothers and pregnant women present which was also followed by donation of cartons of Cowbell Milk to the different hospitals to aid their good work.

This recent move by the company was seen as a laudable venture in the expressive appreciation of its valuable, actual and potential customers during this year’s commemoration of World Milk Day. 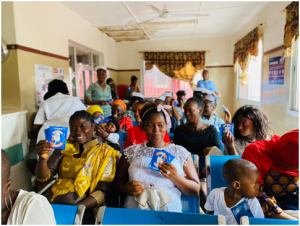 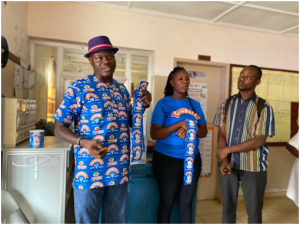