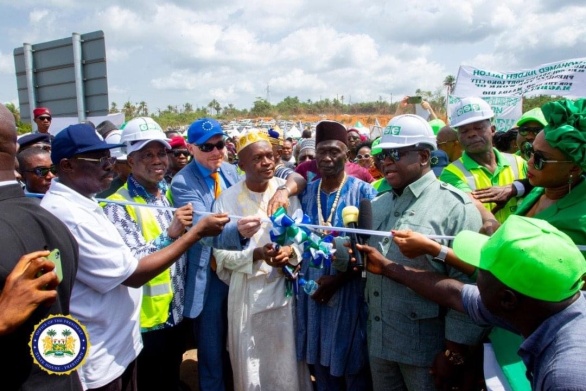 All roads were leading to the Rogbere Community in  Port Loko District on the 14th May 2022 where on that very day, during a very auspicious occasion that was full of life, His Excellency President Dr Julius Maada Bio commissioned the 48 million Euros (Le 634 billion) Magbele Bridge, during which the President informed the huge gathering  that the 163-meter-long modern two-lane bridge, now provides a safer corridor for trade and commerce.

President Bio underscored that in less than 4 years alone in Port Loko District, his Government, with our EU partners, has constructed the 163-meter-long modern two-lane bridge stressing how in less than 4 years, they are also constructing a $270 million USD airport terminal at Lungi, Port Loko District even when the other people wanted to move the airport away from Lungi.

As the thunderous applause was dying down it was once more revived when the President stated also, “In less than 4 years, we are reconstructing and modernizing the Tagrin ferry terminal and working on bringing 4 new ferries. In less than four years, we have reopened the iron-ore mines at Marampa, expanded its operations, and created more jobs for our people in Port Loko District,” he said.

“Fewer mothers are now dying in childbirth and fewer children under five are now dying as there is better immunization and primary health care. Our friends in the UAE have also invested in constructing a major health facility. In just four years, my Government thought it fit to bring in agricultural investors to consider rice production in the Rombeh area. There is an investment in onion and vegetable production in Port Loko District.

He said those developments could be added to electricity access [solar] in Lokomasama and other places in just four year informing how he  personally came to Lokomasama in 2019 to switch on the lights maintaining how in just four years, his Government has invested extensively in Port Loko District by all accounts.

The Director General of Sierra Leone Roads Authority (SLRA), Ing Amara Kanneh, stated that the bridge was constructed with funds from the European Union (EU) under the supervision of the National Authorizing Office (NAO) in the Ministry of Planning and Economic Development, saying that the two-lane bridge would replace the dilapidated one lane.

He also pointed out that the bridge was 7.2 meters on each side with a footpath of 5 meters as opposed to the old one that had no footpath, noting that the load-bearing capacity of the bridge was guaranteed.

“This bridge will stand the test of time and if preventive measures are observed and maintained, it will serve for more than 100 years. Thank you very much President Julius Maada Bio for providing the requisite leadership. Thank you, the EU,” he concluded.

EU Ambassador to Sierra Leone, Manuel Müller, expressed delight that the bridge, which project they funded, was being commissioned by the President of the country, adding that the construction of the New Magbele bridge started in March 2018 as part of the package of roads infrastructure projects Sierra Leone and the EU intended to round up before the 2023 rainy season.

He further noted that they had a long and strong relationship with Sierra Leone and with a track record of working together in education, governance, decentralization, agriculture, environment, rural electrification and the management of public finances further expressing hope that the EU would continue to work with the country to achieve its development agendas.

“What we are witnessing here today at Magbele, also, is part of a huge programme of building bridges between nations. The cooperation of the EU and Sierra Leone has contributed to more connectivity in the sub-region,” he concluded. 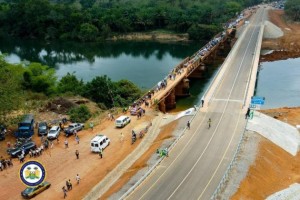