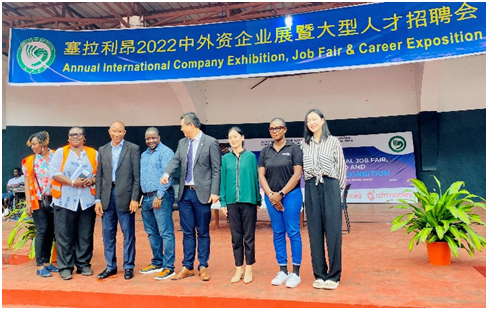 The Confucius Institute at the Fourah Bay College University of Sierra Leone with collaboration with the Academic & Career Advisory Counselling & Student Complaints Services and the University of Sierra Leone has on Saturday 12th November, 2022 hosted its annual International Job Fair, Career Expo And Company Exhibition at the Amphitheater on Fourah Bay College Campus in Freetown.

At this year’s Job Fair and Career Expo a total of more than 50 Companies and enterprises in Sierra Leone participated, providing more than 600 job opportunities for young people.

The Chinese Director of the Confucius Institute at Fourah Bay College, Professor Jing Man said that this year’s event has been the fourth time the Confucius Institute at USL is collaborating with the Academic and Advisory Counseling Services of the University of Sierra Leone, by building an effective and efficient platform for both employers and potential employees to find each other saying the employers included 24 Chinese businesses, adding that the Institute at the University of Sierra Leone has jointly held large-scale job fairs, which fully reflects the high emphasis on graduate employment.

She maintained that with the construction of the “Belt and Road” and the advancement of China-Africa cooperation, more and more Chinese enterprises have entered Sierra Leone, adding that the Confucius Institute at the University of Sierra Leone insists on focusing on the local area and serving the community, building an “employment bridge” connecting Chinese enterprises and the people of Sierra Leone, providing excellent human resources for Chinese-funded enterprises, and providing more employment opportunities for local people.

The Chinese Director hoped that all young people will take this job fair as an opportunity, cherish the opportunity, actively do a good job in docking and negotiation with employers, communicate with employers sincerely, fully display their talents, actively participate in market competition, and choose suitable jobs for themselves.

She urged young people present to continue to improve on their qualities and abilities, change wrong concepts and carry forward the spirit of not being afraid of hard work.

The Acting Deputy Commissioner of Labour at the Ministry of Labour Social Security, Chiblee Francis Kamara commended the Confucius Institute University of Sierra Leone and the Academic, Career Advisory, Counseling, Students Complaints Services for organizing the Annual International Company exhibition, Job Fair and Career Exposition which he considered as appropriate and timely in view of the nexus between education/training and employment on the one hand, and the mandate of the Ministry of Labour and Social Security generally.

He said that the provision of career advisory and counseling by tertiary institutions like the University of Sierra Leone is necessary and, is seen as an introduction to the kinds of situations potential job seekers are likely to encounter in transitioning from the World of Academia to the World of work.

He pointed out that the event, can be likened to a One-stop- Shop modern Employment Centre that provides the opportunity for the real actors of the economy (that is,  employers and prospective job seekers/workers) to meet physically and to discuss employment relations especially in respect of recruitment, placement and employment.

He concluded by assuring the gathering that the Ministry will continue to work with the organization of employers and workers, Private Employment Agencies and other relevant stakeholders for the promotion of labour administration.

The Deputy Registrar of FBC representing the VC and Principal of USL expressed their gratitude for the meticulous organization by the Confucius Institute and welcomed the arrival of Chinese-funded enterprises.

They said they hope to continue to carry out various cooperation with the Institute in the future and promote friendly exchanges between China and Sierra Leone, and wished that applicants can find suitable jobs.

On his part, Chargé d’affaires of the Chinese Embassy in Sierra Leone Li Xiaoyong, said that in recent years, with the continuous development of Sino-China relations, the mutual beneficial cooperation between the two countries in various fields has been continuously strengthened.

He said that Chinese-funded enterprises in Sierra Leone are not only actively carrying out production and various operations, but are also actively fulfilling their social responsibilities and establishing a harmonious relationship with Sierra Leoneans and communities.

“This Job and career exhibition and talent recruitment fair is a good platform for Chinese enterprises and professionals with talents in various fields in Sierra Leone to enhance mutual understanding and exchange, I hope that everyone can promote their corporate culture, tell a good corporate story, and at the same time find the talents they need,” he revealed.

Closing the opening ceremony was the officially declaration of the International Job Fair, Career Expo and Company Exhibition during which time the young people had the opportunity to meet employers physically and discuss employment relations especially in respect of recruitment, placement and employment.