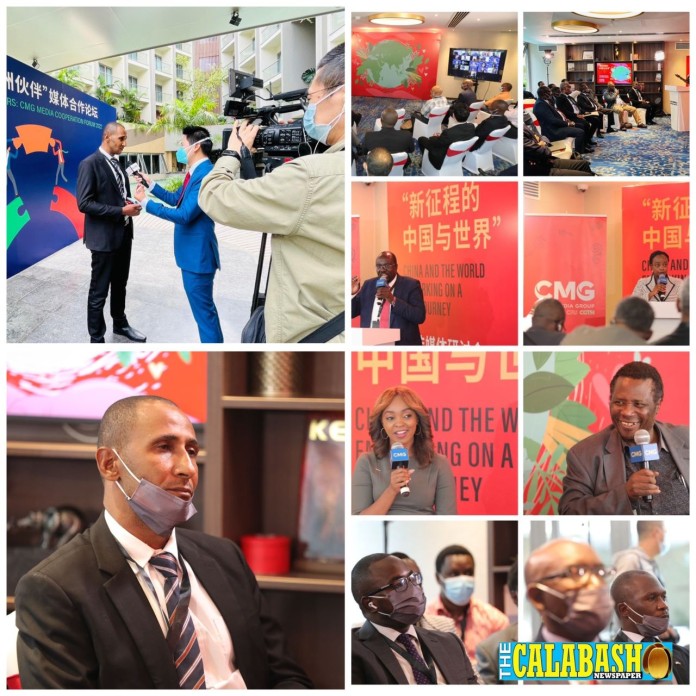 As a way of exploring, deepening and expanding channels for China-Africa Media Cooperation, the China Media Group (CMG) Africa and Communication University of China co-launched the African Partners CMG Media Cooperation Forum 2022 on the 16th November 2022, as a hybrid event, at the Radisson Blu Hotel & Residence in Nairobi Arboretum area, Kenya’s capital.

The theme for this year’s summit was, “Planning Common Development in the New Journey and Enhancing Global Communication Between Chinese and African Media”.

In attendance were Chinese and African media professionals and scholars who participated in two sub-forums online each themed on “Building China-Africa Media Dialogue Mechanism” and “Construction on the China-Africa Media Public Opinion Ecology”.

Participants shared their insights on how to build a China-Africa Community with a shared future at the event titled “China and the World Embarking on a New Journey”.

During the opening ceremony of the forum, the Media Professional from Sierra Leone, Amin Kef Sesay aka Ranger, the Publisher and Managing Editor of The Calabash Newspaper in Sierra Leone, which has a strong online presence, proffered constructive ideas and ways on how to expand channels for China-Africa Media Cooperation.

Delivering a statement on: “The Need to Open up Channels for China-Africa Media Cooperation”, the erudite and charismatic Publisher and Managing Editor of one of the fastest media entities in Sierra Leone, expressed profound thanks and appreciation to the China Media Group (CMG) Africa and Communication University of China for inviting him to witness the co-launching of the African Partners CMG Media Cooperation Forum, which this year is held in Africa, to be precise, Nairobi, Kenya.

He congratulated the People’s Republic of China for successfully concluding its 20th Communist Party of China National Congress that was recently held further wishing China well as it embarks on a new journey to build a comprehensive socialist modern state.

Amin Kef also expressed hope that China’s new journey will have a positive impact on the world in this current international situation that is full of instability, uncertainty and the serious challenges to global peace and development.

He intimated that it must be noted that, since the Forum on China- Africa Media Cooperation was established 10 years ago, various Online and Offline modes of enhancing that cooperation have been proffered by delegates from the two sides agreeing to strengthen media cooperation.

The prolific Publisher and Managing Editor pointed out that without saying the least, fruitful results and valuable experiences have been achieved in strengthening the cooperation, with delegates from both sides agreeing to deepen China-Africa friendship and enhance people to people bonds.

Dilating on the Channels for China-Africa Media Cooperation he reiterated that China has been helpful to African nations in not only developing their media capacity but assisting African nations in many other areas of development for which he commended China.

He informed that as media practitioners, it is an established and well known fact that the cardinal responsibilities of the media is to inform, educate and entertain in an objective manner as opposed to misinform.

Ranger underscored that, at times, certain individuals deliberately misinform with the objective to create an ulterior impression far from the truth adding that  in a world where international relations matters we have witnessed the rivalry among certain countries trying to gain superiority and in their attempts at trying to achieve that will want to woo other countries on their sides.

He maintained that the media should stand in-between, neutral, to give the populace the right facts as opposed to propaganda and falsehoods.

“It is only by strengthening cooperation that the media can expose the real facts from lies as international politics is full of hypocrisy and deceptions,” he proffered evoking a thunderous round of applause from the audience.

He continued that within the context of strengthening the relationship between Africa and China, the media has significant roles to play in enhancing that.

“The media should objectively portray the advantages that are being derived from the bi-lateral or multi-lateral relationships that China has with African countries,” he pointed out furthering that whether it is providing funding for any project or services highly needed, those should be reported by the media with emphasis on the mutual benefits to be derived.

He stressed that by informing the populace, people will know the rationale behind certain bi-lateral or multi-lateral moves or offers otherwise speculation will take over.

Amin Kef stated that such is important against the backdrop that dating back to the Cold War era there has been trading of misinformation between the Western World and the East maintaining that it is his belief that China has been making serious efforts to correct that trend which could be the major reason why it is strongly interacting with the African Media to put things into proper perspectives.

He suggested that in order to put events, activities, gestures etc into their proper perspectives in truthful ways, then conscious efforts must be made to open up more Channels for China-Africa Media Cooperation.

The influential media professional stated that though it was at the 2015 Forum on China-Africa Cooperation (FOCAC) in Johannesburg, South-Africa that President Xi initiated the China-Africa Press Exchange Centre program which aims to train and build capacity for African countries’ news officials and reporters, promote more exchanges and mutual visits between Chinese and African journalists and press professionals, train 1,000 African media professionals each year, and support exchanges of reporters by more media organizations, those channels or opportunities that are already established must be strengthened and  other channels created that could enhance media cooperation.

“In as much as the media world is becoming more digital, I would recommend that the Chinese and African media should promote access to digital innovation and deepen cooperation in areas of digital technology and digital economy to strengthen exchanges and share opportunities and ideas,” he also proffered adding that China could help in the digital migration that various African media groups are conforming to which could help greatly to promote professionalism and objectivity.

“Help could come in the form of technical assistances and provision of useful equipment,” he also maintained emphasizing that strengthening exchange of journalists on both sides should be maintained and where possible expanded to incorporate more participants who will end up benefitting from learning new ideas.

In a constructive manner, he suggested that Chinese Embassies in African countries must try to align themselves closely to African Media groups in friendly and cooperative ways so that they can work closely on certain issues.

He said without any attempt at ideological indoctrination, a close affinity with media entities in Africa will help in broadening wider understanding in many areas or fields between the Chinese and Africans as well as make available useful information.

Amin Kef Sesay pointed out that historical reference could be made to the genesis of the cooperation, how it has developed over the years and t could be improved on. He said abridged books for children could help in reinforcing truthful stories or narratives of the relationship between China and Africa, their cultural differences and beliefs also adding that simple films could be developed on various aspects of media cooperation between China and Africa which could also help in creating strong impressions.

The highly respected Media Professional suggested that China and Africa should continue to uphold the principles of equality, mutual benefits and win-win cooperation, and push forward China-Africa media cooperation to a higher level through strengthening exchanges on media policies, media communications, and cooperation in media industries, thus playing a more significant role in improving people’s well-being and building a community with a shared future for mankind.

He admonished that China and African countries should intensify policy dialogues, deepen cooperation in key areas such as news coverage, content creation and channel building.

“In as much as China also provides a means for the education for African students such could be maintained. The knowledge that they garner from there is invaluable and once they have completed their courses, they can return back to Africa and assist in the growth of the continent among which could be media practitioners,” he said adding that as of now China is also pursuing greater relationships with African ‘think tanks’ so as to improve and help implement policies on social, political, economic and military issues.

He expressed the hope that China will open up its border completely, after effectively combating COVID-19, so it will be easier for more exchanges between the media on both sides.

The Publisher and Managing Editor concluded by stating that the media on both sides have been upholding the spirit of friendly cooperation and working continuously to safeguard fairness and justice, telling stories about China-Africa cooperation in the new era and shouldering responsibilities to advance global development, promote common values of mankind and actively create an international public opinion atmosphere of cohesive development and cooperation.

He said, however, it is his expectation that with time the relationship will become deeper as more channels of cooperation between China and Africa are opened up to benefit as many as possible.

There was also a session during which guests discussed the topic “Channels for China-Africa Media Cooperation” and the participants included Amin Kef Sesay, Managing Editor, The Calabash Newspaper, Sierra Leone, Patrick Oyet, President, Union of Journalists of South Sudan; Co-owner of Juba Echo  Donatien Niyonzima, Reporter, China-Africa Magazine (online), Lovering Sichizya, Reporter, Zambia News and Information Services!online” and Susan Karago, Deputy Chief Executive Officer at Baraka FM. It was a very impressive session as all the participants dealt well with the topic as their expressed views and suggestions were well in place, enlightening and very informative.

In another session, Bernard Momanyi, the Editorial Director of Capital FM, introduced their integrated media column in cooperation with CMG Africa and Zhang Shuting, President of Communication University of China, delivered a video message.

The highpoint of the opening ceremony of the summit was when CMG Africa together with representatives from the African  Union, East Africa Community and African Broadcasting Union unveiled the “China Media Group Program Exhibition-Africa Stop”.