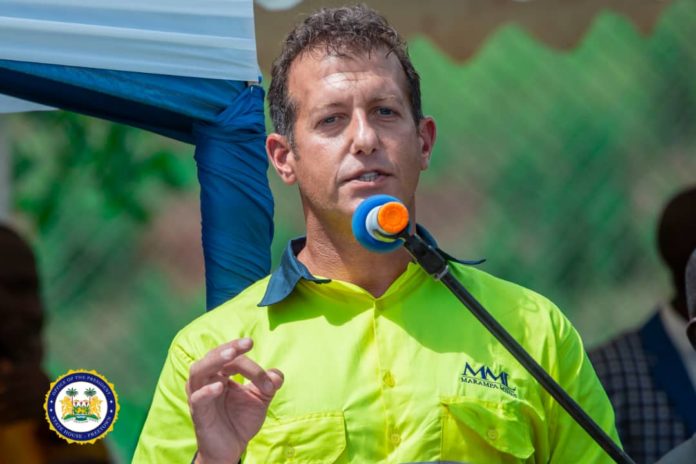 President Julius Maada Bio has on the 5th May, 2022 commissioned the expansion project of the Marampa Mines Limited (MML), a subsidiary of the Gerald Group, from 2 million dry tonnes per annum, (DMTPA) to 3.25 MTPA, after the world’s largest independent, employee-owned metal trading house, recently completed the due process.

Host Paramount Chief of Marampa Chiefdom, Port Loko District, PC Alie Koblo Queen Kabia II, expressed gratitude on behalf of his people and happiness for the expansion by MML adding that the event which would mark a big boost to the economic growth of the country, called for national celebration.

He told the gathering that the Gerald Group, operating MML, had already done a lot for the chiefdom and by extension the entire district by making sure that peace and cohesion existed among people when it agreed to adhere to a corporate social responsibility that was developing the chiefdom and its communities.

Executive Chairman and Chief Executive Officer of Gerald Group, Craig Dean, thanked President Julius Maada Bio for his leadership in settling the dispute between the Government, the company and the people of Marampa. He stated that the company remains one of the world’s oldest and largest independent metals trading for advancing economies and building a more sustainable future.

He further noted that many big iron ore companies of the world produce 62% but that they at Marampa are producing 65% high-grade ore that is being transported and sold to many countries across the world. He added that the Government of Sierra Leone owns a 10% shares at MML and that they had already employed over 2,000 Sierra Leoneans, with about 40% of the employees being women.

“Your Excellency, ladies, and gentlemen, by next year, we will expand our production to 7 million tonnes per annum. We want to have a bigger scale of production that will be beneficial to the people and Government of Sierra Leone and our company. Thank you very much,” he concluded.

In his statement, President Julius Maada Bio said as a Government they believe that the mining sector is critical to national development and future prosperity, adding that that was why they commissioned a comprehensive, nationwide geophysical survey to obtain first-hand data that would help them negotiate with potential investors.

“We are also reviewing a favourable and inviting taxation and regulatory regime that promotes beneficiation, community development, and Environmental, Social and Governance (ESG) initiatives. As you already know, we have worked very hard over the last four years to make Sierra Leone a low-risk investment destination.

“Additionally, may I suggest that with new renewable energy technologies, MML could do better by integrating the use of cleaner energy in parts of its operations. This could be part of a future growth and sustainability strategy and clearly one that presents Sierra Leone’s mining sector as one that is open to innovation and low-carbon sources of energy,” he said.

He also lauded the fact that gender was firmly on the agenda of MML and that women were a meaningful and significant part of the workforce, adding that addressing the issue of gender parity in the mining sector is a novel idea that sits very well with his Government’s overarching priority of gender equality and women’s empowerment in national development.

“So, women, who are now encouraged to study STEM [science, technology, engineering and math] disciplines for free through 17 years of school and university under my Government’s free quality school education agenda, can get preferential placements at these kinds of mine sites.

“As a Government, we urge investors to be patient, open, and engaging, and we will do everything necessary to nurture a very healthy relationship – one that fosters goodwill, and from which the investors can register healthy profits and reinvest or repatriate those profits. So, I find the deep commitment to what Craig Dean calls ‘the inherent long-term value and potential in Sierra Leone,’ very assuring. Rest assured, therefore, that Government will fully play its part,” he said.