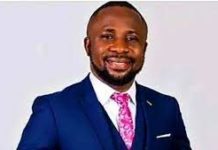 A purported mentally deranged youth, popularly known as Blacka was recently remanded at the Male Correctional Centre in Freetown after appearing in court on the principal charge of Public insult and provocation Contrary to section 2 of the Public Order Act of 1965.

His detention aroused divergent comments with emphasis being placed on the fact that since he is mad it was preposterous for the Magistrate to have remanded him in prison instead of sending him to a mental home.

After spending a night in detention the Magistrate then granted him bail.

One of Sierra Leone’s well versed and versatile legal luminaries in the person of Lawyer Rashid Dumbuya who is also the Executive Director of a rights activist organization, known as Legal Link and an award winning Lecturer at the University of Sierra Leone, in Public Statement dated 4th May 2022, expressed his candid views on the matter.

He said the Christian Lawyers Centre hereinafter referred to as LEGAL LINK is appalled and outraged by the frivolous, malicious and vexatious prosecution of BLACKA, a mentally – ill patient, by the Police giving cause for him to be remanded at Pa Demba Road prison at least for one day.

He said it could be recalled that Mohamed Mansaray ( alias Blacka) together with one business woman Kadiatu Yankaday were both charged with one count of Public insult and provocation Contrary to section 2 of the Public Order Act of 1965.

The Executive Director narrated that the accused persons were arraigned before Magistrate Rashid Jalloh of Magistrate Court No 4 Holden at Pa Demba Road in Freetown with the Police alleging in their Particulars of Offence, that on diverse dates between January 1 and April 23, 2022, in the presence of Mohamed Fofanah, the accused persons made insulting remarks against President Julius Maada Bio with intent to provoke him to commit a breach of the peace.

He continued that both accused persons pleaded not guilty to the offence adding how the Lead Defence lawyer for Blacka, C Pujeh Esq made an application for bail for him on the grounds of him being a mental health patient.

The rights activist lamented that notwithstanding that, however, the Magistrate refused the application for bail for both accused persons and sent them on remand at the Pa Demba Road prison, adjourning the matter to the 4th of May 2022.

He highlighted that following the outcry on social media over this travesty, the case was hurriedly called up the following day with bail granted to Blacka ( mental health patient) and the other accused person charged along  with him respectively by the Magistrate.

The Executive Director said as an organization that  defends the rights of vulnerable groups in Sierra Leone, they take the greatest exception to such an inhumane and barbaric act meted out against Blacka, a mental health patient by the State and vehemently condemn its continuation in fundamental terms.

He argues that whatever was the underlying motive and consideration behind such an unprecedented move to prosecute a mental health patient by the State, it is vital to note that such cruel act on vulnerable persons like BLACKA, has just succeeded in unleashing the highest level of embarrassment to our nation’s human rights credentials at the International level.

Lawyer Rashid furthered how at a time when the issue of mental health rights has taken the centre stage within the United Nations and other regional integration frameworks, it is suicidal to say the least for such stories of torture and victimization to be happening against mentally – ill patients in the country.

He underscored that apparently it has been widely rumoured that the  illegal detention and malicious prosecution meted against BLACKA  leading to his remand, may not have been unconnected with his earlier cynical statements and audios made against the President of Sierra Leone and his Government.

“But whatever the speculations might be, one thing that is certain however is the fact that, the story of BLACKA has revealed beyond imagination the extent to which our society has degenerated into savagery and beast-hood, not sparing even the mentally retarded from punishment for their unconscious involvement in the politics of the day,” he bemoaned maintaining how it is a sad and worrying state of affairs indeed.

He ,however, said looking beyond the BLACKA incident a legitimate question that comes to mind is: are their adequate, effective and robust laws, policies and institutions in Sierra Leone to protect the rights and welfare of mentally – ill patients like BLACKA? Saying the answer is certainly a big NO.

The Executive Director said while a colonial Lunacy Act does exists, it is quite clear that such statute does not adequately address the needs of mental health patients in the country adding that the few institutions also established to take care of mental health patients are largely under- supported and constrained in terms of expertise to deal with the special needs of those patients.

He pointed out that in the locus classicus case of PUROHIT VS THE GAMBIA, a matter that was decided by the African Commission on Human and Peoples Rights concerning the  inhumane treatment of mental health patients in The Gambia, the African Commission ruled that “the Gambian Government has violated the African Charter on Human and Peoples Rights by her refusal and failure to have effective laws, policies and institutions in place to protect the rights and welfare of mentally – ill patients in the country”.

The significance of the above case at the African Continent , he continued, has revealed that States in Africa including Sierra Leone are under a duty to ensure that the rights and welfare of mentally retarded persons are adequately addressed either through legislations and or care institutions and not neglected at will.

Lawyer Rashid said unfortunately in Sierra Leone, apart from the acute absence of legislations that comprehensively protect the rights of mentally- ill patients in the country, there are still a large number of mental health victims roaming about the streets of Freetown aimlessly, unattended to and uncared for.

He argues that mental health legislation, policies and institutions are necessary for protecting the rights of people with mental disorders who are amongst the most vulnerable section of society.

“Apart from the threats to their life, they face stigma, discrimination and marginalization all the time and this increases the likelihood for their human rights to be violated,” he expressed dismay.

He suggested that a mental health legislation is therefore needed in Sierra Leone so as to provide a legal framework for addressing critical issues such as community integration of persons with mental disorders, the provision of medical care of high quality, the improvement of access to care services, the protection of civil rights and the promotion of rights in other critical areas such as housing, education and employment.

The Legal Link Executive Director said while they wholeheartedly condemn any attempt by anyone to show disrespect in whatever form to the office of the President, it should however be noted that in this exceptional situation, Blacka was  merely a victim that was being exploited by wicked and unreasonable people for selfish gains.

He said if the Police were to take any drastic action, such should have been done against those people for aiding and abetting the commissioning of the crime.

According to him, it is certainly not Blacka that usually video himself when such uncomely words are being said by him maintaining that people do the video recording as well as the sharing which clearly constitutes an Offence under the Cyber Crime and Security Act of  Sierra Leone.

He recommended for the Police to go after them and treat Blacka as a mere victim and a mental health patient that needs help.

The Executive Director said, in conclusion, given all the injustices that have been meted out against Blacka, a mental health patient in the entire saga, as a legal advocacy group that defends the rights of vulnerable persons in Sierra Leone, they are coming up with the following recommendations for the urgent attention of all and sundry: That the Sierra Leone Police offers no further evidence against Blacka in the pending criminal case before the Magistrate court which is yet to be discharged;

He mentioned that Magistrate Rashid Jalloh formally acquits and discharge Blacka of the offence (s) charged against him; that LEGAL LINK unequivocally and unreservedly condemn the exploitation of BLACKA, a mentally- ill patient by all sides of the political divided and urged that BLACKA be seen as a victim deserving of help rather than a stooge to be used and exploited at will by selfish politicians.

That the Government of Sierra Leone through the Ministry of Health  provides the highest attainable standard of medical treatment and health care to BLACKA including confinement and rehabilitation as he goes through this perilous time of his life.

He continued that adequate compensation be provided to Blacka by the Sierra Leone Police over his illegal detention as required under section 17(4) of the 1991 constitution of Sierra Leone.

The rights activist said lastly they are urging the Parliament of the Republic of Sierra Leone to repeal and replace the colonial Lunacy Act through the passing of a more robust legislation that will specifically and effectively protect the rights of mental health patients in the country.

The Executive Director underscored that it is only by taking the above interim measures that the effects of the BLACKA situation can be mitigated before the International community stressing how  any omission by the State will be deemed as a clear violation of the human rights of not only BLACKA but all mentally- ill patients in the country.