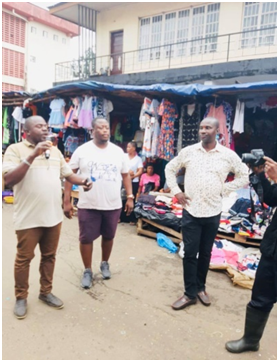 A nationwide sensitization to various communities and institutions on the newly printed banknotes was undertaken by members of the Civil Society Consortium on Community Accountability and Service Delivery have on Monday, July 25th 2022.

Engaging business people, various Civil Society Organizations at Congo Market in Freetown, Chairman of the Consortium, William Sao-Lamin said they discovered that there are still some gaps regarding the new currency notes that were recently released by the Bank of Sierra Leone.

He said some people don’t really understand the figures and there are others who are going to the various Commercial Banks to withdraw money but could not get what they want.

He said the sensitization seeks to allay the fears of the public that there is not enough cash in the banks maintaining that any bank that fails to give customers the money they want should be reported to the relevant authorities for action to be instituted.

He admonished the people to take good care of the money and accused some of the banks of undermining the process to paint the Government in a bad light.

In his contribution, Alphonso Manley said they want to discard the misinformation that is being peddled that there is no money in the banks. He said CSOs welcomed the printing of the new notes as it will save many from holding huge amounts and accused some people of withdrawing huge amounts of money but failing to deposit them again which he noted is not good for the country.

He called on business people to abide by the laws of the State and on the people to have confidence in the money and the system further urging them to use the banking system.

On his part, Hassan Jonathan Kamara admonished all Commercial Banks to abide by the policy of the Central Bank accusing some commercial banks of making things difficult for customers which he said will not be accepted.

He called on customers to go to the banks to collect their monies disclosing that there is another container of money is on the way for Sierra Leone and called on the Bank Governor to make sure they pump additional money into the banks to avoid mistrust.

Several people commended the CSOs for educating and assuring them.