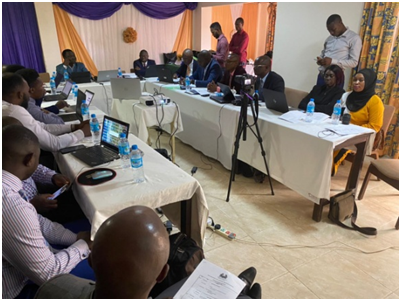 The Annual National Debt Sustainability Analysis (DSA) workshop spearheaded by the Ministry of Finance commenced on the 25th July 2022 at the Leisure Lodge, Off Cape Road, Aberdeen in Freetown and will last for five days.

The exercise is an almanac requirement to assess the country’s level of debt distress in the medium-to-long term in order to provide appropriate policy advice to the Government on the status of borrowing following the Public Debt Management Act 2011.

In his statement, Chief Economist, Alimamy Bangura on behalf of the Financial Secretary stated that the workshop is to inform policymakers of the risk of debt distress and take appropriate fiscal decisions and policy actions to minimize the risk.

He continued that Sierra Leone is using the revised low-income country Debt Sustainability Framework (LICs DFS) excel based template, which was developed by the IMF and World Bank to assess the level of risk of debt distress in developing countries.

Alimamy Bangura added that the DSA is a scientific and pragmatic approach to assessing whether or not a country’s public debt is sustainable along a given macroeconomic path.

He asserted that the global crisis of both COVID 19 and the Ukraine-Russian War has triggered Global shocks and exacerbated macroeconomic and debt vulnerabilities.

The Chief Economist disclosed that this situation has worsened the outcome and outlook of key macroeconomic variables which includes GDP, Inflation, revenues, exports, and foreign reserves, which are fundamental in promoting public debt sustainability.

He explained that amidst the challenges, the country has improved on its debt management strides with an overall PEFA score of D+ TO B+. This he said is anchored on the preparation of the domestic suppliers’ Arrears Strategy and Medium-term Debt Management Strategy as approved by Cabinet and published.

He added that it is important for the country to continue reforms in public financial management, deepen domestic revenue mobilization, rationalizes expenditure, support growth-enhancing sectors, prioritize grants and highly concessional financing, and pursue innovative financing such as Public Private Partnerships (PPPs) to reduce the high risk of debt distress in the country.

Alimamy Bangura urged all participants to take the exercise seriously as it is critical to promote transparency and accountability.

In his technical presentation on the debt situation in Sierra Leone, Deputy Director of Public Debt, Dr. A Thullah outlined the Public Debt portfolio and profile for 2017-2021 stating that the Debt burden has increased significantly and the real GDP growth projection for 2022 is 3.6 with steady growth.

Deputy Director of Public Debt, Charles Santigie Conteh, said the exercise is a form for learning and to also underscores the openness of the public debt situation in the country has included the Press and Non-state actors to be part of the process.

He furthered that the country is not in debt distress at the moment as compared to other African countries in the sub-region.