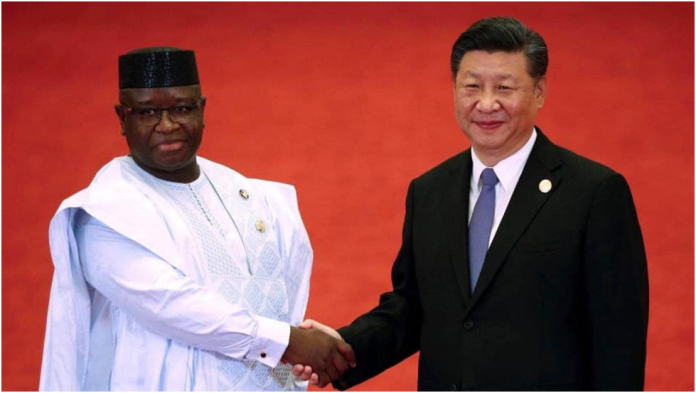 Every Sierra Leonean Government since then, no matter which party is in power, has always put a priority on strengthening the country’s relations with China. In December 2016, President Ernest Bai Koroma visited China and met with President Xi Jinping in Beijing where both sides agreed upon elevating the bilateral relations to a Comprehensive Strategic Cooperative Partnership. Two years later, in September 2018, President Julius Maada Bio attended the Beijing Summit of the Forum on China-Africa Cooperation (FOCAC) and held a fruitful discussion with President Xi Jinping. The important consensus reached by the two Heads of State during this meeting and on other occasions has paved the way to further strengthen our cooperation in the new era.

The past 51 years have witnessed the long lasting friendship between China and Sierra Leone in the process of supporting each other and safeguarding international justice and fairness. On 25th October, 1971, Sierra Leone, together with other friendly countries, voted in favor of restoring China’s lawful seat in the United Nations. The late Chairman Mao Zedong pointed out, “It was our African brothers who carried us into the UN”. For a long time, China had been firmly supporting Sierra Leone within its utmost capacity when Sierra Leone was in difficulties, especially so during the Ebola epidemic and the Covid-19 pandemic. By forming Comprehensive Strategic Partnerships, giving each other concrete support on core interest and major concerns, ensuring the multilateralism and central role of the United Nations in international relations, and boosting developing countries’ strengths overall, the two countries have truly become worthy of each others’ trust. We work closer now than ever before, and the developing countries are having a louder say on global issues because of it, contributing significantly to the stability and prosperity of the world.

The past 51 years have witnessed the notable results of cooperation between China and Sierra Leone, including the construction of the Youyi Building, the National Stadium, Mange Bridge, the Magbass Sugar complex, and the RSLAF headquarters in the 1970s and 80s; the China-Sierra Leone Friendship Road, Bo Stadium, Jui Hospital, the China-Sierra Leone Friendship Primary, and Middle Schools, and the Ministry of Foreign Affairs Office Building from the 1980 to 2000; and the second Juba Bridge, the Limkokwing-Regent Road, Myohaung Officers’ Mess and Single Officers’ Quarters, the National Optical Fiber Backbone Network Phase Two, as well as the Foreign Service Academy etc. up to 2018.

The past 51 years have witnessed the expansion of our trade and economic cooperation. Our bilateral trade volume has now reached over 500 million US Dollars, and the accumulated direct investment from China to Sierra Leone has reached 3 billion US Dollars . Since 1973, the Chinese Government has dispatched more than 500 Chinese medical personnel to Sierra Leone under the health assistance program, and since 1976, China has provided Government scholarships for over 1000 Sierra Leonean students to study in China. China has also dispatched about 100 agricultural experts to Sierra Leone since 1991 to provide technical training.

The relationship formed between China and Sierra Leone is a microcosm of the relationship at large between China and Africa as a whole. China will continue to uphold the principles of sincerity, real results, amity and good faith and the principle of pursuing the greater good and shared interests in its cooperation with Sierra Leone. China will also continue to implement the Nine Programmes announced by President Xi in the Opening Ceremony of the 8th Ministerial Conference of the FOCAC last year, including: providing an additional 1 billion doses of Covid-19 vaccines to Africa, providing 10 billion dollars in funding towards African trade financing, 10 billion dollars to promote China’s investment in Africa, and 10 billion dollars to support small and medium-sized African enterprises and to construct a “Green Passage” for African agricultural exports to China. Through these projects, China and Africa will expand their fields of cooperation, innovate existing cooperation methods and promote further common development.

In 2021 we celebrated the centenary of the Communist Party of China (CPC) along with our Sierra Leonean brethren. During the 2nd half of 2022, the 20th Congress of the CPC will be held, and the Chinese Embassy will keep our Sierra Leonean friends posted on the development of this important meeting.

The world today is undergoing major changes unseen in a century, and the inherent strength of developing countries and emerging markets will shine through as trailblazers of this new era. As the world’s largest developing country, China will always stand along with Sierra Leone and other African countries, so as to inject more stability into the world at large. When faced upon all sorts of unilateralism, power politics, and bullying, China and Sierra Leone both have the responsibility to practice true multilateralism and to maintain international justice and fairness. China appreciates Sierra Leone’s unique and influential role in regional and international affairs and is ready to work together with Sierra Leone to protect the interests of all developing nations, promoting a fairer and more rational international order. With our joint efforts, we will achieve the goal of building an even stronger China-Africa community of shared future.