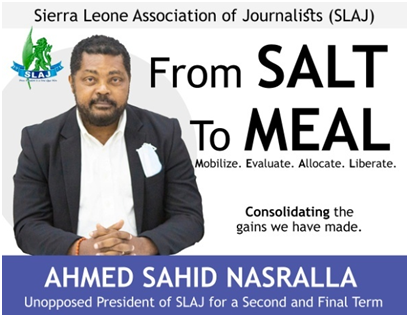 This medium was reliably informed that the SALT Manifesto of the Ahmed Sahid Nasralla-led Executive of the Sierra Leone Association of Journalists (SLAJ) on the 23rd July 2022 officially ended and a new Manifesto titled MEAL has been born.

Ahmed Sahid Nasralla is the President of the Sierra Leone Association of Journalists (SLAJ), who is now serving his second and final term.

SALT, which stands for Stimulate/Strengthen, Appreciate, Listen/Learn and Transfer,  basically targeted mindsets of journalists and reinforced their roles and responsibilities with regard to responsible practice and the overall growth of the media in Sierra Leone.

The new manifesto MEAL, the acronym for Mobilize, Evaluate, Allocate and Liberate, will seek to consolidate the gains made in the SALT manifesto by continuing with the SLAJ project of defending, promoting and protecting free speech and free media whilst strengthening financial sustainability and accountability at national and regional levels.

Speaking at the national orientation program for incoming executives of SLAJ at J & E Hotel, Koribundu Road, Bo City, Southern Sierra Leone, President Nasralla noted that when running for office three years ago he promised to look into the welfare of journalists, address gender imbalance in SLAJ and the media, provide mentorship and training for members and advocate for the repeal of the Criminal Libel Law.

He said to a large extent his executive succeeded in achieving the SALT manifesto promises.

Key among the successes include the repeal of the Criminal Libel Law and the passing of the IMC Act 2020, annual Government of Sierra Leone subvention to SLAJ (which has been increased by H.E. President Bio), launching of a Journalism Welfare Fund to promote public interest journalism and support journalists in times of emergencies, establishing a Gender Advisory Panel to help SLAJ address gender imbalance in the media, increasing the membership intake (with the highest number of female members) whilst attracting a lot of qualified people with various academic credentials among several other achievements.

President Nasralla also mentioned the national media viability and investment conference and its prospect of establishing a national basket fund to support public interest journalism in Sierra Leone; the biggest gains ever made in the World Press Freedom rankings since the repeal of the Criminal Libel law, and successful celebration of the Associations 50th Independence Anniversary.

He used the opportunity to appreciate the ENTIRE MEMBERSHIP of SLAJ for the overwhelming confidence reposed in him to continue as President of SLAJ for the second and final term UNOPPOSED.

Conclusively, President Nasralla noted that in implementing the MEAL manifesto he shall use his usual approach of team work, inclusivity (leaving no one behind), dialogue, engagement, consultations, and receptive to constructive criticism.