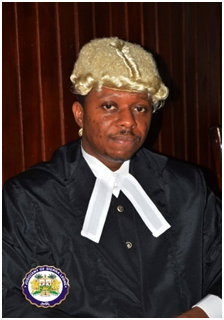 High Court Judge, Hon. Justice Augustine K. Musa, has on the 23rd July 2022 sentenced 26-year-old Sheriff Kamara, a first year Student of the United Methodist University and a staff of A & S Clearing and Forwarding Agency operating at the Queen Elizabeth II Quay in Freetown to life imprisonment.

The particulars of offence revealed that accused Sheriff Kamara on the 5th day of February, 2021 at Machama village, Romende Chiefdom in the Karene Judicial District in the North-West Region of the Republic of Sierra Leone, murdered Mariama Kongaima.

According to the Police, the accused, Sheriff, admitted that the allegation against him is true, narrating further that, “we were in a love relationship since 2016 when the deceased was a pupil until she wrote the West Africa Senior School Certificate Examinations (WASSCE) in 2018. I later engaged her through her parents (traditional marriage) before she moved to stay with me in 2019.”

He continued, “I received urgent message about the sickness of my mother at Machama village and I travelled with the deceased Mariama. She was asleep when I took her phone and saw a text message which reads: Hi baby are you at home now, go sleep well.”

The accused said he saw another text responding to the earlier text message:”yes o dear I’m at home now thanks for caring.”

He said he didn’t explain anything regarding the message until they left for a nearby stream at Machama village to bath. Whilst there on Thursday, 4th February, 2021 they decided to eat palm fruit and he (accused) decided to show the text messages to the deceased which was followed by a palaver and the deceased removed a knife to stab him but he narrowly escaped.

During the scuffle, he mistakenly hit the deceased on the neck with the knife when she got a big cut and started bleeding profusely.

“She couldn’t survive and later died that same day,” the accused concluded and disclosed that he immediately called his brother to report his unfortunate act.

In his first appearance before Hon. Justice A.K. Musa, the accused, Sheriff Kamara, denied the allegation and pleaded not guilty.

“I didn’t tell the police that I stabbed the deceased,” the accused told the Court.

He was represented by S.I. Koroma Esq. The matter was prosecuted by State Counsel Y.S. Koroma.

In his summing up to the Jury, Hon. Justice Augustine K. Musa said the accused Sheriff Kamara stands before the Court on a one Count charge of murder, stressing that it is a fundamental principle of the English Law that a person is innocent of a Criminal offence until proven guilty.

He told the Jurors that for the prosecution to succeed to prove his case, he must meet the threshold which is proof beyond reasonable doubt. This means, the prosecution must be able to establish each and every essential element of the offence/offences.

“There are four essential elements the prosecution must prove…that the accused did the killing with a sound mind, the person killed was a reasonable creature, the killing must have been done with malice aforethought… and that the death followed within a year and a day,” said Hon. Justice A.K. Musa (J).

The autopsy report certified by Sierra Leone’s Pathologist, Dr. Simeon Owizz Koroma, revealed that the neck of the deceased was swollen with a single stab wound on the base of the neck (right aspect) with 2cm wide. On the Neck Musculature, it was discovered that there were bruises, oedema and bleeding into the neck muscles and structures.

Relying on the unanimous guilty verdict returned by the Jurors against the accused Sheriff Kamara, Hon. Justice Augustine K. Musa sentenced him to life imprisonment for the offence of Murder.