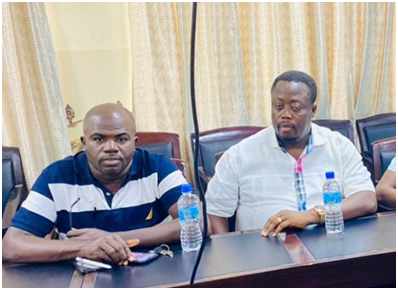 In a Press Release dated18th July, 2022 and issued by the Civil Society Consortium on Community Accountability and Service Delivery, signed by William BM Sao-Lamin as Chairman, it was categorically stated that the entity partners with Government Ministries, Departments and Agencies, INGOs, NGOs, and other Development Partners to protect and promote transparency and accountability in the use of development funds and facilities, ensuring free and fair disposal of supports, transportation of goods and services, adhering to regulations, popularization of financial policies, monitoring the process of Decentralization of State institutions to the Local Councils and most especially provisions that are made for community development in the country.

Further mentioned was that the Civil Society Consortium on Community Accountability and Service Delivery exists to contribute to promoting Economic, Social and Cultural Rights (ECOSOC) for strong communities and to ensure sustainable development for the people and to live in dignity and have access to basic opportunities and facilities such as markets, food, health, education, shelter, investors and basic amenities.

The Consortium, it was highlighted, functions through networking, partnership, and collaboration with Government, communities, Local Councils, Local and International Agencies.

Also mentioned was that the entity has observed the operation of an incessant smuggling cartel across various border crossing points in Sierra Leone and further notes with dismay the inferior quality of smuggled goods across those crossing points which has exacerbated an already crippling health environment in Sierra Leone.

Also indicated was that quite apart from the smuggling, the Civil Society Consortium has also noted the production and promotion of different energy drinks and illicit drug substances and alcohol which continue to ravage the sanity of young people and the Sierra Leone population.

“As a Civil Society which holds Government accountable on Service Delivery, we have noted with great concern the budgetary toll or effects on Government in providing increased health and sanitation outcomes for its people,” it was highlighted.

According to the Consortium, in 2022, the Government of Sierra Leone budgeted around Le 897 billion on the Health Sector alone aside from the different interventions by International Donor Partners within the Health Sector.

As a responsible institution, it was emphasized that let it be known that Government cannot be seen as striving to uphold the health sector, whilst a portion of society continues to open doors to harmful and inferior products in Sierra Leone; an action which clearly undermines the efforts of Government in the health sector.

The Consortium says it is therefore calling on all authorities concerned especially the Sierra Leone Standards Bureau, the National Revenue Authority, Sierra Leone Police, Importers of beverages, Civil Society Organizations, local producing factories, and Ministry of Trade to take the necessary actions on the aforementioned menace which should include but not limited to: Imported or Exported goods, especially consumables must go through thorough tests before finding their way in or out of the local market/ store, to discourage smuggling or the production of harmful products, advocate for the introduction of tax stamps for products like spirits, alcohol, energy drinks and loads of others and an affirmative action to boycott certain productions which are clearly and consistently harming many.

The Consortium says it is immediately calling on the Standards Bureau to engage with NRA for them to develop a strategy that will help the Authority in introducing the Excise Stamp to minimize illegal importation of alcohol and other brand substances.

They also called on the Commissioner General and his team to further take the necessary actions by robustly engaging and collaborating with the relevant Government agencies for them to introduce the Excise Stamp so that the Authority will help minimize the illegal importation of alcohol, energy drinks, and other substances through porous borders.

It was further pointed out that the good work of the Authority, within record time, is making Sierra Leone proud to be among countries that is growing digitally in collecting revenue for the State even during such a difficult time in the world and to also ensure that all issues dealing with smuggling, illegal importation of energy drinks, alcohol and other substances across the country’s porous borders are resolved in the interest of all with key emphasis on the introduction of the Excise Stamp to cub smuggling.