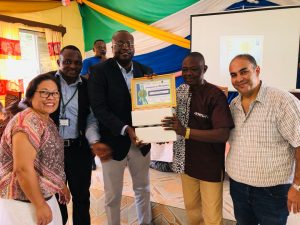 As he continues to Promote the Development of Agriculture and Sorghum Cultivation in the country, Chief Executive Officer of JAMJAY Agricultural, Construction, Estate & Logistics Company Ltd, and Chairman Sorghum Farmers Association, Denis Jusu, has been nominated among several other individuals for this year’s AWOL National Achievement Award  as Best Farmer of the Year at an event to be held on Sunday 29th December 2019 at the Bintumani International Conference Center in Freetown with the theme: “Education is the Key to National Cohesion and Development”  under the distinguished patronage of His Excellency the President Dr. Julius Maada Bio.

It is not surprising that Denis Jusu was nominated as he has immensely contributed in many ways to the improvement of the agriculture sector in Sierra Leone and for being the major supplier of sorghum to the Brewery with over 25,000 farm families countrywide.

Prior to his nomination Sierra Leone Brewery Limited, HEINEKEN International and the European Cooperative for Rural Development (EUCORD) on Friday 29th November 2019 awarded Denis Jusu as Chief-Honourable Sorghum Deliverer & Local Content Champion during their pre-harvest training for farmers which was blended with an awards ceremony to recognize the efforts of individual farmers that have demonstrated dogged commitment to growing the sorghum ingredient.

Denis Jusu also on the 18th May 2019 pioneered the launching of the biggest farm in Sierra Leone on 1200 hectares of land for agricultural purpose and mainly the cultivation of sorghum at Malompoh village at Yoni Chiefdom in the Tonkolili District.

Many that this medium engaged to comment on the nomination of Denis Jusu opined that he deserves it based on his tremendous work he has been doing to promote the country’s local content policy. Some have even positively predicted that Denis Jusu will surely emerge victorious to bag the covetous award.