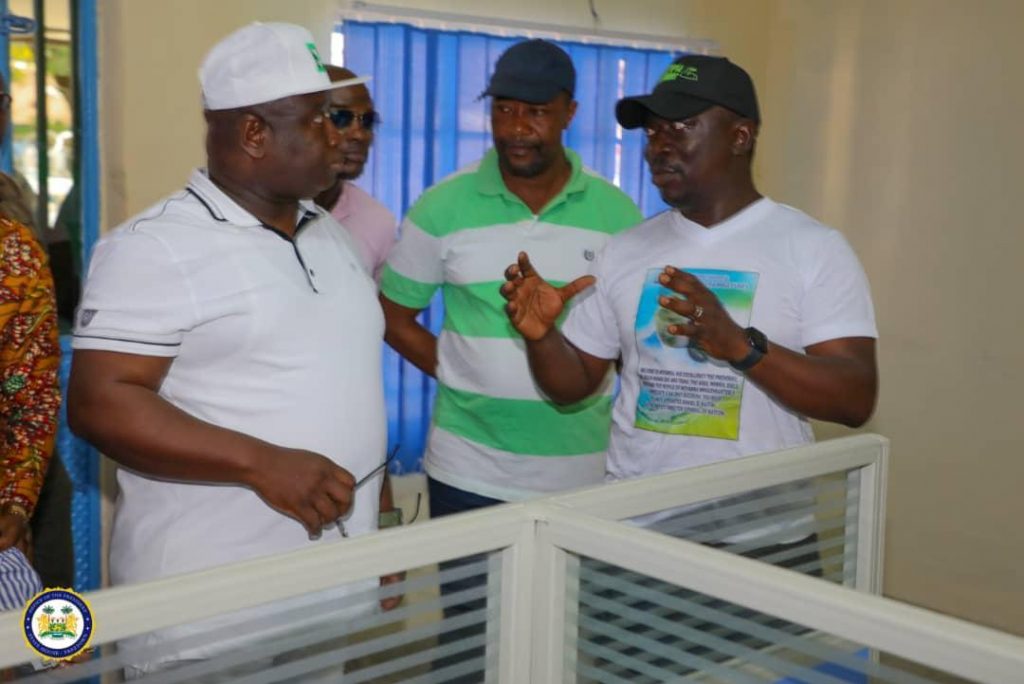 The current Director General of the National Telecommunications Commission (NATCOM), Daniel Kaitibi has said that he is determined to achieve President Julius Maada Bio’s vision of a digitally inclusive nation.

NATCOM was established by an Act of Parliament to, among other things, regulate the telecommunications sector in this country including the issuance of licenses to telecommunications service providers. Without any iota of exaggeration, it is indeed a very important institution considering the fact that telecommunications play pivotal roles in the dissemination of information which has made it possible for the world to become a Global Village. Besides, through the issuance of frequencies, licenses and imposition of fines for various violations by institutions it regulates thereby generating steady revenue for Government.

It is without any gainsay to state that indeed the institution therefore needs individuals who are capable and very vast in the field so that NATCOM could efficiently deliver on its mandate .

It was against such a backdrop that His Excellency, President Julius Maada Bio, in his wisdom took the laudable decision to appoint the result-oriented Director General in the person of Daniel Kaitibi. From facts gathered so far, by this medium, it was never a mistake on the part of the President to appoint the indefatigable Director General of NATCOM because it is so apparent that within the shortest possible after he occupied that position he went to work by instituting overwhelming transformations that have catapulted the institution to an envious position today.

This Information Technology guru has taken compliance by telecoms service providers to a higher level, has raised high the bar in terms of monitoring of MMOs, Internet Service Providers to ensure that things are done exactly the way they should be done.

It must be underscored that regulatory institutions around the globe are known to  be very disciplined and not to be easily manipulated but unfortunately for this country such has been lacking in the past thereby making NATCOM as a regulatory institution to appear as a lame duck. However, things took a dramatic U-Turn ,when Daniel Kaitibi became the institution’s Director General as he wasted no time to instil discipline to the letter, ensuring that all those institutions that fall under the regulatory eye or framework of NATCOM play according to the rules as enshrined in the institution’s Act and his terms of reference as Director General.

His style of leadership is paying hugely in terms of enhanced telecommunications provided by Mobile Companies, improved internet connectivity by Service Providers, increased revenue to Government and even seen in employees’ dedicated commitment to assigned tasks all cascading to utmost customer satisfaction as well as contributing to economic growth.  Many have attested that indeed the NATCOM DG is translating President Bio’s vision of an improved telecommunications landscape in the country.

Indeed, it is evident that all the aforementioned achievements made so far by Daniel Kaitibi as Director General of NATCOM fall within the context of fulfilling certain objectives which an effective telecommunications regulator must strive to attain. These include but not limited to providing a fair market ecosystem for sector players, to satisfy consumers with improved and high-quality products and services, to maintain high levels of market penetration etc.

Indisputably, DG Kaitibi’s strides so far taken and the impact that they have created is a clear manifestation that he is on the right track and is positioning the institution to positively transform the entire telecommunications sector in the country.

In an exclusive interview with this medium, the forward looking and highly patriotic Director General, Daniel Kaitibi intimated that he is grateful to President Julius Maada Bio to give him the opportunity to use his expertise to sanitize the telecommunications landscape in the country. He said he is determined to ensure that the confidence reposed in him by the President to deliver will be demonstrated to the best of his ability and through effective team work.

The Director General, Daniel Kaitibi stated that as a matter of urgency these are some the plans that he intends to translate into reality:

The Director told that H.E. President Bio is desirous  of creating and leaving behind (after his 10- year mandate) a digitally inclusive  Sierra Leone.

It is no gain saying that the benefits of effective regulation have proven to result in greater socio- economic growth, increased investment, lower prices, better quality of service, higher penetration and more rapid technological innovation in the sector.

DG Kaitibi stated:” My team and I will continue to streamline, transform and realign processes and procedures, work to analyse and assess cumulative effects on outputs, improve knowledge management, regulatory processes and make NATCOM a better regulatory entity”.