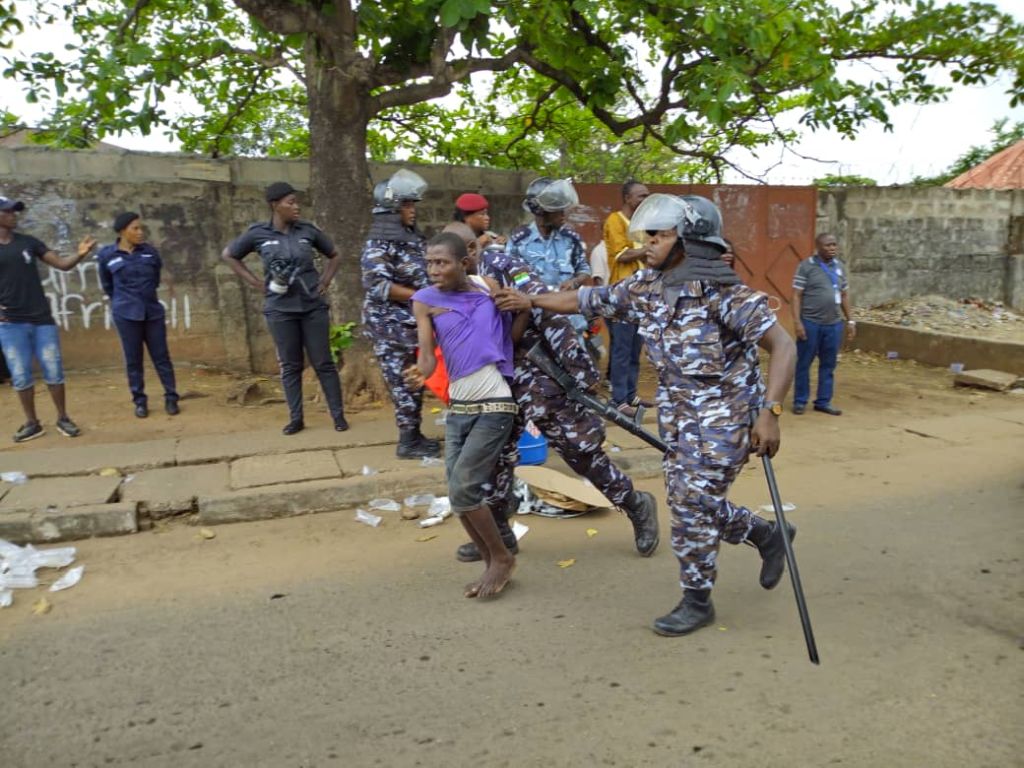 The Sierra Leone People’s Party has claimed for years whilst in opposition that it was a victim of repressive laws and policing and now has a chance to effect change whilst in Government.

When he came to power on April 4, 2018, since coming to power in April 2018, President Bio made commitments to reform the security sector and to protect human rights in a country where impunity for police abuses is deeply entrenched.

Given the amount of deaths that have occurred since at the hands of the security forces, the Government of Sierra Leone must show renewed commitment to fulfil its promise to improve the human rights situation in the country by ending entrenched impunity for Police killings of protesters, Amnesty International noted in 2018.

President Bio after this latest unfortunate incident in Makeni must now send a strong signal that Police abuses will not be tolerated anymore by making a positive statement about strengthening human rights, as well as reform of the criminal justice system with a strong commitment to achieve accountability and redress for past abuses.

The authorities must ensure and promote the right of individuals to peacefully assemble without fear for their safety, Amnesty said, adding that the Government has a key opportunity to implement reforms that would help the Police manage demonstrations effectively and safely, restore the public’s trust in the security forces and live up to the Police’s own motto – A Force for Good.

Amnesty noted appallingly that for 10 years, the SLP have got away with murder as peaceful protesters and bystanders have lost their lives, or been seriously injured, with no one held to account.

Amnesty called on the Government to address entrenched impunity for Police abuses.

Amnesty in its report (2018) stated that over the past 10 years, Police have frequently used excessive force to disperse spontaneous protests, with at least nine protesters killed and more than 80 injured.

Amnesty International’s report also found that more than 80 protesters had their properties looted or were arbitrarily arrested.

No Police Officers were held criminally responsible for any case documented by Amnesty International, despite recommendations made by two Commissions of Inquiry and the Independent Police Complaints Board.

In most cases, Police Officers accused of wrongdoing were only transferred to a different department.

In one case, Amnesty International found that the Police Officer suspected of giving the command to shoot had been promoted.

In another case, a Police Officer suspected of being responsible avoided disciplinary action despite being recommended for dismissal in a 2009 Commission of Inquiry.

In March 2017, a young boy was shot dead and two students injured when Police opened fire on students protesting the closure of their University in the Southern Province of Bo.

In August 2016, two schoolboys were shot dead and four young men injured when Police opened fire on a protest against the removal of a planned Youth Village.

As such, like Amnesty International, the main opposition All People’s Congress party is calling on the Bio administration to take positive steps to prevent further loss of lives of Sierra Leoneans through excessive use of force by the security forces in putting down protests by unarmed citizens.

At the same time, the authorities must ensure that victims and their families enjoy the right to an effective remedy, including adequate compensation, and guarantee of non-repetition.

The authorities should set up a mechanism for compensating victims of Police abuses and address the chronic lack of funds, training and hierarchical accountability within the Police Force.

Amnesty also called for the Independent Police Complaints Board, set up in 2015 as an external body to oversee the Police, to obtain more resources and enforcement powers.