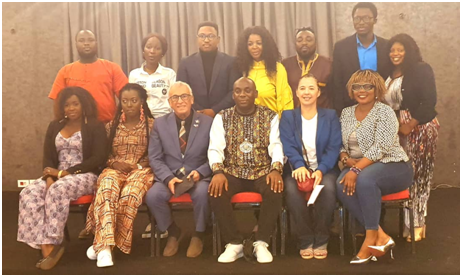 He started by intimating participants that all over the world the mass media enjoy dual acknowledgment as a social institution and an industry.

Dr. Abboud added that human communication, through designed channels – not through speech or gestures – dates back to many tens of thousands of years ago when our ancient ancestors painted on the walls of caves.

He revealed that the term media, in its current application relating to channels of communications, was first used by Marshall McLuhan (1911-1980), a Canadian professor, philosopher, and public intellectual who said:  “The media are not toys; they should not be in the hands of Mother Goose and Peter Pan executives. They can be entrusted only to new artists, because they are art forms.”

The development oriented personality maintained that, however, most observers of the communications landscape in Europe in the early decades of the nineteenth century saw markets as guarantors of greater freedom of expression adding that it was regarded as a conduit through which voices, perspectives and lives could be brought into the public sphere, with the media’s agenda-setting function often influencing debate, thinking and priorities within society; in its role of educating, informing and entertaining.

Dr. Adonis Abboud underscored how the mass media, whether electronic or print, exist essentially as a social institution to provide voice to the populace through a ‘full, truthful, comprehensive and intelligent account of the day’s events in a context – that gives meaning arguing how the role of the media is no doubt critical in providing information ,especially in a democratic society and promoting good governance.

He said as an industry or business concern, the media while providing their traditional products of news, views, information and entertainment, keep in view, and are in fact being directed, motivated and controlled by the manifest principles of the bottom line.

The overriding goal of this school of thought, he informed, is that of profit maximization and increased returns on investment of the owners.

According to him, opinions vary among media scholars on the propriety or otherwise of either of the dual concepts of the media maintaining that as Oso (2006) rightly observed “the debate is no longer a normative question of the propriety of commercialization of the media, rather it is coming to terms with the opportunity cost of a media system weighted in economics at the expense of social responsibility to the society.”

Expressing gratitude for the enabling environment created by the current administration, he noted that the Sierra Leone media landscape, despite several shortcomings, continues to thrive, thereby exposing the latent potentials of the industry.

He informed how deregulation and diversification have made both the country’s print and electronic media relatively an independent and pluralist industry, very interesting and more so in the wake of the repeal of the dreaded Public Order Act which he likened to a sword of Damocles over its practitioners.

Free market ideology, he stated, presupposes that anyone who spotted a gap in prevailing provision could enter the market and submit his or her ideas to the judgment of readers, viewers or listeners, now evident in the number of newspapers, radio and television stations as well as blog sites.

Dr. Abboud furthered how such has led to the increasing participation of private investors and has transformed the media to become a business whose proliferation is being exploited by both urban and rural communities to access and deliver information for social and business purposes.

He pointed out that the primary business of the mass media is to produce content – fill the broadcast hours, the print pages or the new internet social media stating how because of limits of time and space, selection of content, then becomes a necessary function.

“Unfortunately, the industry is a capital intensive proposition that requires substantial investments,” he added saying consequently, the economics of media production, distribution and consumption, has led to increasing commercialization arguing that the essence of investment for returns has led to challenges of how the media balances its role as the Fourth Estate of the realm and society’s conscience with that of economic realities.

He stated that, inevitably, commercial considerations have debased the statutory mandate of the media pointing out that as a matter of fact, Media commercialization is the natural precursor of “commodification” of news, information and other sundry products through the policy and principle of cash and carry or what is now known in media parlance as “Let Them Pay” (LTP) arguing that such is what Oso (2006) refers to as news by barter.

He then asked the questions: What are the implications of the emerging issues and their implications for public interests and sustainable national development? What suggestions for the way forward?

It is true that advertisers are the backbone of the media industry, but the question is: how true is it that as a result of trying to deliver a mass audience to advertisers and sponsors, content and quality has become secondary?

Dr. Abboud said those questions remind him of 2007 at the British Council while when they, as an organization, highlighted the role of the Media in saving lives reference was made to the “Exclusive” Newspaper which carried a front page alert on a 6 year old heart patient, Abubakarr Jalloh, who had 6 months to live unless operated overseas for a congenital heart disease which saved his life.

He revealed that, ABK, as the boy was popularly known was flown to Paris through the PIKIN BIZNESS and had a successful life-saving surgery adding how he is now 22 years old enjoying a healthy life.

Dr. Abboud said their International Rep, the late David Applefield, a Financial Times representative in Paris who was present remarked that: “Sierra Leone has 33 newspapers but very little news”.

He stated how there are several concerns about commercial influence of the media and asked: how is business done in the industry? Does it affect the depth of competition, content development and ownership?

According to Dr. Abboud, quite a number of people who watch TV today do so on their phones, iPad or tablets or even computers adding that with a little network coverage and data subscription, the subscriber will have the express permission to many sources saying such accounts for the increasing level of disinformation and as a result, social challenges and control difficulties

“The wealth and success of the industry has continued to expose the media as low-hanging fruits, leading to the mushrooming of several newspapers and radio stations,” he argued.

He continued by saying that in looking at public ownership of the media, the need for improved protection and media regulation are critical underscoring how the corrupting of the media through excessive reliance on advertisers and sponsors as well as political manipulation are indisputable and real major problems.

He also revealed that there are several cases where the owners of media organizations do not ensure payment of wages and salaries arguing that such exposes the journalists to corruption while other editors use stories submitted by their reporters to blackmail those involved making money and later sending the story to the dustbin.

Dr. Abboud said there is no doubt that the drive to maximize advertising revenues by assembling the largest possible readership has led to some arms of the media no longer playing the watchdog role and have deviated into entertainment and sensation rather than objective information and rational debate on public issues.

“Consideration around the intensified principles of commercialization and competing principles like the ever-changing technological initiatives and provisions such as free Wi-Fi, Google, YouTube etc. and effects on the future of public communication have suddenly become emerging factors that needs evaluation,” he stated adding that Media Commercialization, Public Interest and National Development then becomes a topic worthy of a careful and comprehensive x-ray maintaining that such developments, including viral marketing, are a double-edged sword for commercial enterprise.

He expressed optimism that as the participants deliberate, the forum will provide an avenue for practitioners to come up with steps to sanitize the industry while mindful of the fundamental principles of the role of the media and the place of commercialization.

Interacting with his ‘Subjects’ on the One Hand….   Dr Adonis Abboud Enjoins Well Meaning Individuals to Care for Orphans

Facilitated by Dr. Adonis Abboud…   3 Bag Scholarships to Study at University of Belgrade

3 Sierra Leoneans Off to Belgrade University On Scholarship