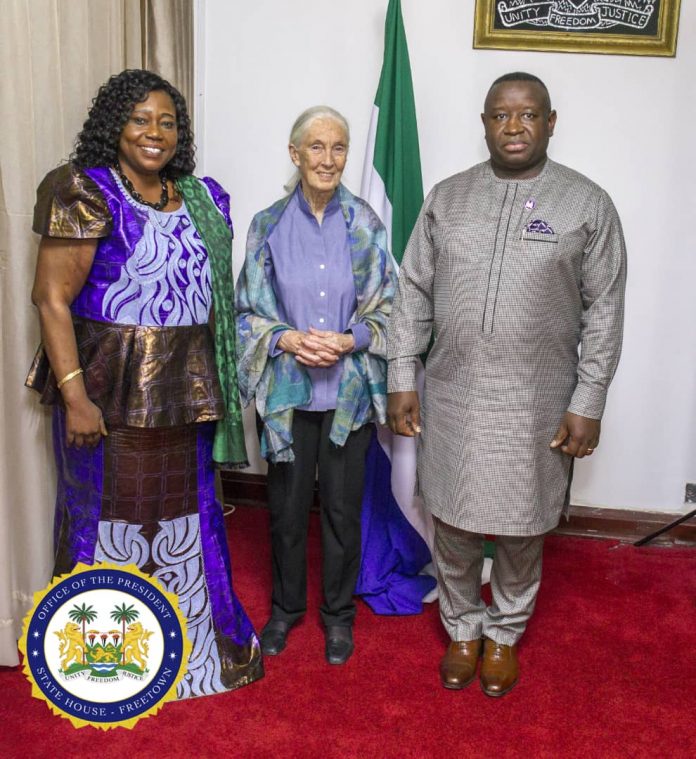 His Excellency President Julius Maada Bio has decorated Dr Jane Goodall with the award of the Order of the Rokel of the Republic of Sierra Leone at a ceremony held at State House yesterday 28th February 2019.

The honour, Sierra Leone’s highest and most prestigious decoration, recognises Sierra Leoneans who have distinguished themselves by making valuable contributions to the country. She is British and one of a small number of non-Sierra Leoneans to have earned that respect in recent times.

Dr. Goodall, DBE, anthropologist and United Nations Messenger of Peace, was instrumental in founding the Tacugama Chimpanzee Sanctuary, the only place in Sierra Leone that keeps rescued chimpanzees. The establishment of the reservation for chimps makes Freetown the only capital city in the world where one can come in contact with chimps.

Dr. Goodall’s discovery in 1960 around chimpanzees had been considered as one of the greatest achievements of the twentieth-century scholarship. Her field research at Gombe, located in western Kigoma Region of Tanzania in East Africa, transformed the understanding of Chimpanzees and redefined the relationship between humans and animals in ways that continue to emanate around the world.

In her acceptance speech, Dr. Goodall said she was truly humbled by the honour, adding that it provided a reason for hope to nature in the country. She said Sierra Leone had a beautiful forest and advised that protecting and restoring it was one of the ways of mitigating climate change.

“A reason for hope is that young people are beginning to help people, animals and the environment because they are all interrelated. As individuals, we are beginning to use our brains every day to think about how we can leave as huge an ecological footprint as possible. We have to give nature a chance and nature will come back.

On his part, President Bio said he was pleased to have Dr Goodall in the country and acknowledged the great work she was doing around the world. He said there was a lot of environmental degradation around the world, noting that human activities were impacting negatively on the environment.

He stated that certain ecologies had been destroyed and that was leading to poverty and adverse weather conditions around the world. He said Dr Goodall’s experience had taught the world about the relationship between human beings and the environment.

“Thank you for your dedication and hard work around the world and rest assured we will support you. I will join my colleagues who are active in supporting wildlife around the world. Thank you so much for accepting our honour,” he said.