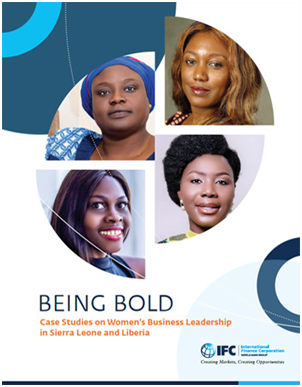 The International Finance Corporation (IFC) Women on Boards and in Business Leadership program, under the leadership of Loty Salazar has come out with a recent publication comprising case studies that were authored by Ann Moline, with additional material provided by Brenda Bowman and Jacqueline Williams.

Titled “Being Bold—Case Studies on Women’s Business Leadership in Sierra Leone and Liberia” the publication presents four powerful examples of how women leaders in fragile markets are using their passion, intelligence, skills, and talents to transform their economies and societies.

The efforts were designed to influence change at all levels of business ecosystems in the regions where IFC works and the program was part of IFC’s holistic approach to advancing gender equality—tied to the achievement of the United Nations Sustainable Development Goals.

It is also aligned with IFC’s mission to create markets and drive diverse, inclusive, and sustainable private sector growth in developing countries.

Dr. Williette James is one of the case studies or personalities portrayed by  the International Finance Corporation (IFC) Women on Boards and in Business Leadership program featured under the category of  “Women And The Media”.

For Dr. Williette James, Assistant Dean, Faculty of Communication and Media Studies at the University of Sierra Leone’s Fourah Bay College, and seasoned journalist, change in societal perceptions of what women can do wasn’t happening fast enough. Well aware of the power of the media to drive messages and influence public opinion, she understood that she needed to win places at decision-making tables, to push for more coverage of women’s professional successes, and increase women’s representation in the industry.

The Big Challenge for her was overcoming gender bias in Sierra Leone’s media and equalizing coverage of women. Williette’s Solution Shattering the glass ceiling to become a change leader who could influence future generations of journalists and a Board Director of a major media conglomerate who could help drive increased coverage of women’s issues.

She grew up where children didn’t typically have professional career aspirations. Boys often dropped out of school early. And, in a country with one of world’s highest teen pregnancy rates, many girls became mothers while still children themselves.

In her traditional community, these circumstances represented societal norms. But Williette always knew she wasn’t like most children in her community.

Determined to pursue an education, she made up her mind to defy tradition every step of the way. It wasn’t easy, to be sure. But she learned to face her challenges head on, persisting despite the odds. Case-in-point: She retook her college entry examinations four times before finally earning the score needed for acceptance at the highly competitive Fourah Bay College.

The persistence paid off: Williette went on to earn a PhD in Communication and Media Studies—the first woman to do so at Fourah Bay. Today, she heads the faculty. “If you give up on your dream, then it was never your dream to begin with,” she says. A role model for female students, Williette is a prominent figure in the Sierra Leonean media. She has worked as a television anchor.

She has held top management and editorial positions at newspapers and in broadcast media. And she has served as a gender advisor on a radio drama series. As a journalist, Williette uses her influential position to write and speak out about women’s issues, including increasing women’s participation and representation in politics and addressing gender-based violence. She is a media lecturer and trainer. She also sits on the board of Sierra Leone’s leading media conglomerate, the Sierra Leone Broadcasting Corporation.

A role model for female students, Williette is a prominent figure in the Sierra Leonean media. She has worked as a television anchor. She has held top management and editorial positions at newspapers and in broadcast media. And she has served as a gender advisor on a radio drama series. As a journalist, Williette uses her influential position to write and

“If institutions are to thrive, women must be an integral part of leadership. They must always be ready to smash every glass ceiling above them and walk through the debris with bravery and wisdom.” – Dr. Williette James

Today, as an active member of the Women on Boards Network of Sierra Leone, Williette is paying it forward by encouraging other women to pursue similar trajectories in other fields. She’s finding camaraderie and kinship with women who, like her, were not content with the biased status quo. She is proud of her accomplishments—and particularly aware of the impact she is having on future generations of diverse journalists as an industry leader.

“What I would love to be remembered for is the hundreds of media students I keep investing knowledge in, on a daily basis. My hope is that they will grow to also invest in others, so this virtuous cycle continues.

The other Sierra Leonean women featured by the International Finance Corporation (IFC) Women on Boards and in Business Leadership program were Ajara Boma, Stephanie Duncan, and Dr. Fatou Taqi.