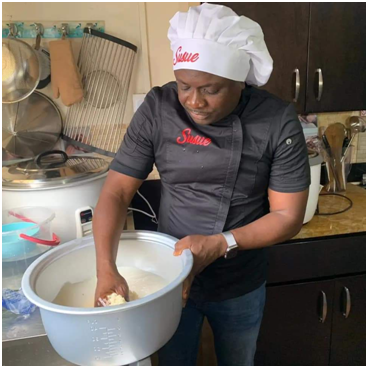 The Founder and Chief Executive Officer of the Africa Young Voices Ambassador Anthony Navo Jr on the 1st November 2022 hosted invitees to a social event at the Africa Young Voices Media Empire on Wesley Street in Freetown, including the Minister of Information and Communications, Mohamed Rahman Swaray, the Managing Director of Africell-SL, Shadi Gerjawi, Hon. Abdul Kargbo, other dignitaries and members of the Press with the objective of appreciating and celebrating the contribution of employees, volunteers, partners, sponsors and friends to socialize in order to celebrate Africa Youth Day.

In his brief statement, Ambassador Navo stated that the purpose of staging the celebration is not only to observe such an important day but to also serve as a way of paying back young people, especially members of staff,  for their hard work and for ensuring that their voices are heard in society.

He mentioned that after the war the Truth and Reconciliation Commission (TRC) outlined certain recommendations to forestall the future reoccurrence of the war and one of them was to create a platform through which young people could freely express their opinions and views on issues rather than to tot guns and cause mayhem.

Ambassador Navo added that since he was elected as a Youth Ambassador across the country, he decided to establish the Africa Young Voices to serve as a medium for young people not just in Sierra Leone but also across Africa to make their voices heard on national issues because the very war that took place in Sierra Leone was similar to that which took places in other Africa countries.

He extended thanks to previous and present Government officials for the liberty and free will that are given to media practitioners and young people to challenge leaders, politicians in the country without being muzzled or humiliated and also the partners, stakeholders for their tremendous support towards the growth of the institution as well the staff.

The Founder and Chairman started that as the situation now stands most of his employees are young people and 99% of them are youth which is a clear manifestation of young people running their own affairs.

During the event, the Minister of Information and Communications, Mohamed Rahman Swaray, enjoined young people to always strive to defeat challenges in life. He said the challenges of growing up always start by letting one’s presence felt in whatever role one finds him or herself advising that as young people they should take every opportunity as a joke but with utmost importance.

He continued by stating that as a Government they are investing in young people to ensure that they can be fully prepared for the numerous tasks ahead of them.

He admonished young people to stay out of trouble maintaining that where there is violence, investors and tourists will not be encouraged to do business.

The Minister concluded by saying that on this special day, he is speaking directly to youths to always be patient, deviate from violence and also ensure that peace is highly maintained in the country adding that if the youth want to reach their goals they must try to do things right because an opportunity once lost cannot be regained.

Climaxing the event was the serving of ‘Pemahun’, a locally prepared dish of potato leaves and rice cooked together by the Chief Executive Officer of AYV Media Empire, Ambassador Anthony Navo Jr, which all the guests who ate it attested was truly delicious and enjoyable.