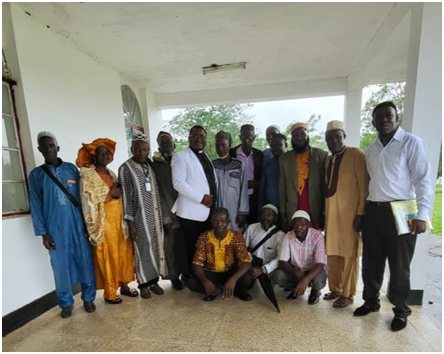 A one-day consultative meeting was held on the 21st September 2022 by the Ernest Bai Koroma University (EBK University) of Science and Technology with Traditional and Religious Leaders of the Muslim Community in the Tonkolili and Bombali Districts.

The Vice-Chancellor (VC) and Principal of EBK University, Rev. Prof. Edwin J.J. Momoh pointed out that the Magburaka campus was originally an Arabic Islamic College but was transformed to EBK University.

He explained that during the process of transformation there was resistance by the Islamic scholars but they later accepted the will of the Government.

According to Prof. Momoh, since the establishment of the EBK University they have done a lot of transformation on the campus and also introduced courses that touch every aspect including Islamic Studies.

The VC further stated that EBK University has raised the Quranic standard by introducing a Bachelor Degree in Islamic Studies course, an opportunity he said residents of Magburaka should make use of.

He pointed out that Islamic students in that community were not opting for the course which was why they had called for such a consultative meeting.

Upon request, the VC made a pronouncement for the construction of a toilet for the University mosque and also awarded scholarship to the first 15 students that will apply for the Bachelor Degree in Islamic Studies course. He asked for the administration to identify those that started Islamic classes but dropped out due to the war in Sierra Leone and after the screening, they will provide 8 weeks’ classes for them and they will be awarded certificates at the end.

He said the University has changed the looks of Magburaka which is being described as the white man’s land adding that they are trying to ensure that the University maintains a hygiene friendly environment.

The Chief Imam of EBK University Mosque, Sheik Ibrahim Conteh, expressed happiness for the call by the University, welcomed and thanked the Vice Chancellor for the good intention.

The District Imam, Alhaji Usif Kamara said they are happy about the message delivered to them by the University and called on the Imams to come together by sending their children to the University to study Islamic Study further assuring the VC that anything he accepts, his sub Imams will also accept.

The Regional Chief Imam’s representative, Sheik Jalloh described the news as a good one for which they thanked Allah and promised to spread the news across the region.

Mr. Bangura representing the Chairlady for Tonkolili District Council commended the move and called on all to embrace the new development.

Paramount Chief Tonkolili District, PC Masakama Kanamanka 111 commended the good work of the VC Prof Momoh and his team for the transformation of the University. He urged his audience to leave all activities and focus on education also expressing hope that the message will be put into good use and make sure that they sell the University by taking 80% ownership of the University through enrolment of their children.

Resident Minister North – East Abu-Abu Abdulai Koroma said the role Imams have in the mosque should be interpreted in the communities they reside urging them to always say the truth.

The Minister suggested that the University should allow every chiefdom to choose one representative to study under the free scholarship. 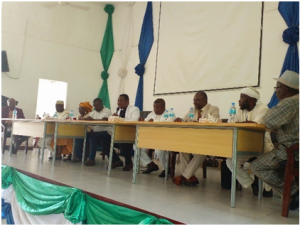