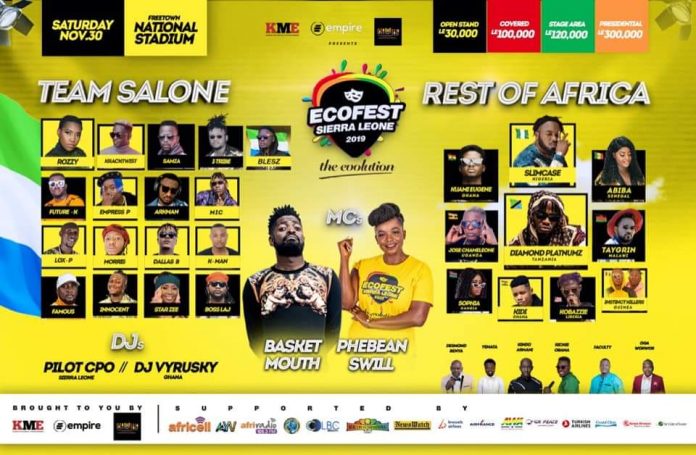 As Sierra Leoneans and Africans await the best show ever in Freetown on the 30th November 2019, the event will be preceeded by a ‘Dance Jam Session’. This jam session will see 7 DJs from six African countries competing for a huge cash set aside by the organisers.

Two DJs from SierraLeone, One from Ghana, One from Nigeria, One from Malawi, One from Liberia and One from Uganda. The show will start with a dance and jam session by 6pm with 7 DJs, there will be two finalists who will battle for the said prize later in the show.

It is no longer a secret that the 30th November will an ‘all-entertaining’ night, with the best in African music and comedy on one stage, one city. The organisers – Kabaka Multimedia & Entertainment (KME), Empire Entertainment and Cribs International have procured two 100kva generators for the night, well enough to assured fans of an uninterrupted show in terms of power. There will also be an electronic backdrop, the best sound system in Africa from Cribs International, detailed security presence with dozens of performance.

The ECOFEST package is so big for anyone to miss. Basket Mouth from Nigeria, Diamond Platinumz from Tanzania, Jose Chameleon from Malawi, Kwame Eugene &  Kidi from Ghana, Instinct Killers from Guinea, and many others from ten nations. In total, over 15 foreign African and over 17 Sierra Leonean acts (artistes, MCs, DJs and Comedians) will be on stage, in one night in Freetown, Sierra Leone. It appears as a ‘Giveaway’ show for just a meagre sum of Le 30,000 for Open Stand at the Siaka Stevens Stadium. There’s a lot on the night no one can afford to miss, and Sierra Leone is the big winner.

ECOFEST is a Sierra Leonean idea for Africa. This African music platform was built by a young Sierra Leonean lawyer, Abu Bakarr Turay aka Kabaka, who is also the CEO of KME. The ‘Festival of African Nations’ (ECOFEST) was built on a strong foundation to bring African music, comedy, culture on one stage. It is a platform for mutual sharing and festivities.