The 44th Ordinary Meeting of the ECOWAS Mediation and Security Council at the Ministerial level took place on the 4th September 2020 in Niamey, the Republic of Niger. The purpose of the meeting was to review the political and security situation in the region, with particular emphasis on the political processes in the Gambia and Guinea Bissau.

The meeting, which was presided over by H.E. Kalla Ankourao, Minister of Foreign Affairs of the Republic of Niger and Chair of the Mediation and Security Council at the Ministerial level was attended by Ministers of Foreign Affairs or Security from across ECOWAS Member States.

Also in attendance at the meeting were the Honourable Speaker of the ECOWAS Parliament, H. E. Sidie Mohamed Tunis, H. E Muhamed Ibn Chambas, Special Representative of the United Nations Secretary General for West Africa and the Sahel (UNOWAS) and H. E. Abdullah Bureima, President of the UEMOA Commission.

In his opening remarks, the President of the ECOWAS Commission, H. E. Jean-Claude Kassi Brou, reiterated the determination of the ECOWAS Commission to strengthen its working relations with Member States, which he believes is important in articulating the interest of the people. He commended the strong political will of the Heads of State and Government in finding a lasting solution to the socio-political crisis in Mali and thanked H. E. Goodluck Johnathan, ECOWAS’ Mediator in the crisis, for his commitment to have the Malian situation resolved.

For his part, the Chair of the Mediation and Security Council at the Ministerial level, H.E. Kalla Ankourao, recalled the challenges COVID-19 has brought upon the region coupled with the breakdown in democratic governance in Mali. Commenting on the electoral challenges ahead, Kalla indicated that the Community should take the necessary steps for the preparation and smooth conduct of the upcoming presidential elections in Guinea, Cote d’Ivoire, Burkinafaso, Ghana, and Niger. Additionally, the Chair stressed that special attention be paid on the terrorist attacks in the region, particularly in Mali, Niger, Burkina Faso and Nigeria.

On the Gambia, Council was informed by the ECOWAS Commissioner for Political Affairs, Peace and Security that the political situation in the country is relatively calm and peaceful, but still remains unpredictable due to issues revolving around the constitutional review process, preparations by the Independent Electoral Commission in terms of the electoral process and conduct of the referendum in readiness for the 2021 presidential and parliamentary elections.

After a period of frank deliberations, Council recommended that all stakeholders are carried along by the IEC in the ongoing electoral reforms and that the outcomes of the reform processes are implemented scrupulously. Council also recommended that the ECOWAS Commission seek extension for the mandate of ECOMIG, which expired at the end of June 2020, to enable the forces monitor the peaceful implementation of the TRRC hearings, as they may generate additional tensions in the country.

On Guinea Bissau, Council recalled that the country was plunged into deeper political and institutional crisis immediately after the announcement of the results of the strongly contested presidential elections, held on the 24th November and 29th December 2019, in the 1st and 2nd rounds respectively, which saw former Prime Minister  Umaro Sissoco Embalo emerged as winner with 54 percent of the votes, but was unable to present the Government’s programs to the National Assembly as provided for by the constitution due to institutional standoff that persisted at the National Assembly.

Council then urged the authorities of Guinea Bissau to ensure the formation of an inclusive Government and ensuring participatory processes, with all national stakeholders, in conformity with the provisions of the country’s constitution and admonished the ECOWAS Commission to intensify its support to the new Government in its efforts to consolidate the democracy and inclusive reform agenda for a new constitution that may lead to national stability. 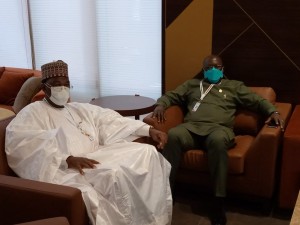