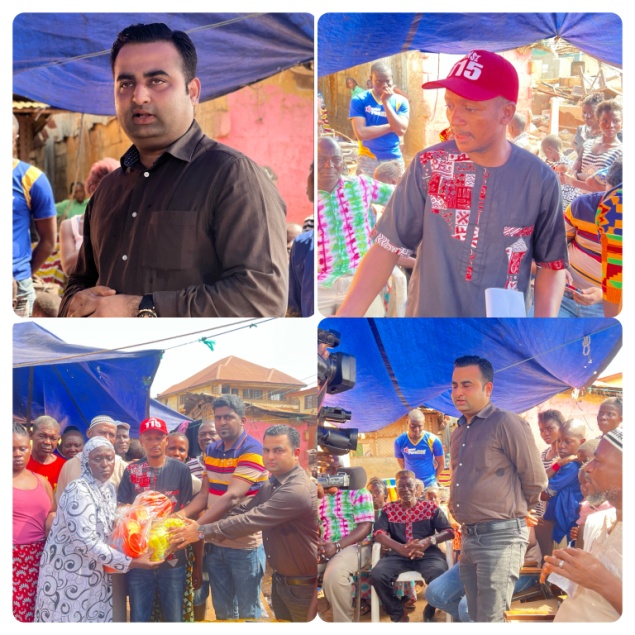 As a way of rolling out its Corporate Social Responsibility, the JOLAKS Manufacturing Company Limited situated in Wellington, within the far East End of Freetown, on the 1st April 2022 offered food and non-food items to fire disaster victims residing at Peacock Farm, Sorie Lane to be precise, in Constituency 115 Ward 405.

Present were Hon. Alpha Amadu Bah, representing that Constituency, Shoheb Panjwani, General Manager of JOLAKS Manufacturing Company Limited, Mukesh Patel, an official of the company, a cross-section of journalists and the victims.

In his opening statement, Hon Alpha Amadu Bah intimated all present that on the 20th March 2022 a fire outbreak gutted houses on 16 Sorie Lane, Peacock Farm and four days before that another fire incident left a house closer by on 17 Water Lane completely burnt down, both within the same community. He furthered that the two incidents were caused by electrical faults, but thanked God that lives were not lost.

Hon. Bah continued that as the Honourable Member of Parliament representing that Constituency, he decided to mobilize assistance for the victims by contacting corporate institutions operating in the locality. He said fortunately the JOLAKS manufacturing company consented to step in and render assistance.

“If we are gathered here today it is for the sole purpose of giving solace to you for what happened and what you are presently going through,” he informed adding that he has brought officials from JOLAKS to offer a donation to them plus what he also personally came with to give them. He told the victims that what will be offered to them are not commensurate to all what they have lost but said the items would help them rebuild their lives.

He extended thanks to the Management of JOLAKS manufacturing company for the laudable gesture and assured the victims that he will still continue to lobby for assistance on their behalf.

On his part, the General Manager of JOLAKS, Shoheb Panjwani, stated that indeed the incidents were tragic maintaining that for now it is only the victims who are really feeling the actual effect of what happened to them. He underscored that for the mere fact that they are operating within the community they do consider themselves as an integral stakeholder of the community and when situations like such occur they must step in and render whatever assistance they are able to garner.

Shoheb informed the victims that they have come with some relief items which will be handed over to them and assured all that as a company they will try their level best to ensure that the community grows in terms of deepening development.

Other stakeholders within the community including the APC Constituency Chairman, Hassan Sesay and a representative from the community mosque consoled the victims by telling them to be patient, trust in God and be steadfast.

One of the victims, Kalatu Kabia, on behalf of the other victims tearfully and profoundly thanked the Management of JOLAKS and wished them well in their business endeavours.

The handing over of the items which included bags of rice, onions, gallons of oil, cartons of soap, rubber buckets, cups, plates, bowls plus mattresses and blankets provided by Hon. Bah formed the high point of the donation ceremony. 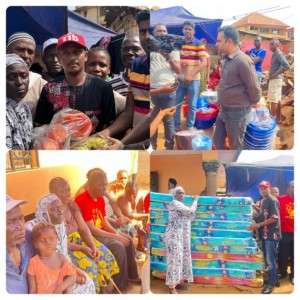