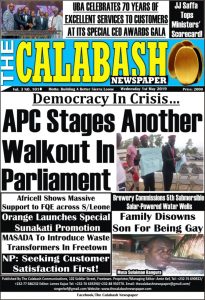 The increasing reports of isolated physical attacks on persons found to be gay seem to have no end in sight as the recent case of Musa Sulaiman Bangura indicates.

“The lady who could not bear the shock of what she had seen decided to alert the neighbours as she shouted in apparent disgust,” Michael explained to The Calabash; adding that Musa then fled the residence to seek refuge at Mile 91 village in the north of the country where he once lived.

A white philanthropist identified as James Brooks is reported to have rescued Musa by providing funds to secure a passport to flee the country in order to save his life having learnt of the numerous physical attacks on persons practising same sex around the country.

Michael further explained that after several threats to Musa’s life from known persons who feel strongly about gays in the community as their sexual orientation is believed to cross the margins of tradition and societal decency, he (Musa) decided to flee Mile 91 village to where he could feel safe.

To compound Musa’s situation Michael went on, his family has disowned him for what they say is bringing the name of the family into disrepute.

It is worth noting that Sierra Leone is one of the countries in West Africa that still haven’t enacted laws to ensure persons with same sex orientation are protected hence the continued atmosphere of insecurity felt by hundreds of these people around the country.

Many have been lucky to escape to other countries while others have been unlucky to have fallen in the net of group of people who have taken as a pastime to physically attack and harm persons indulged in same sex.

To date, the whereabouts of Musa reportedly remains unknown since he was exposed by his girlfriend some months ago.