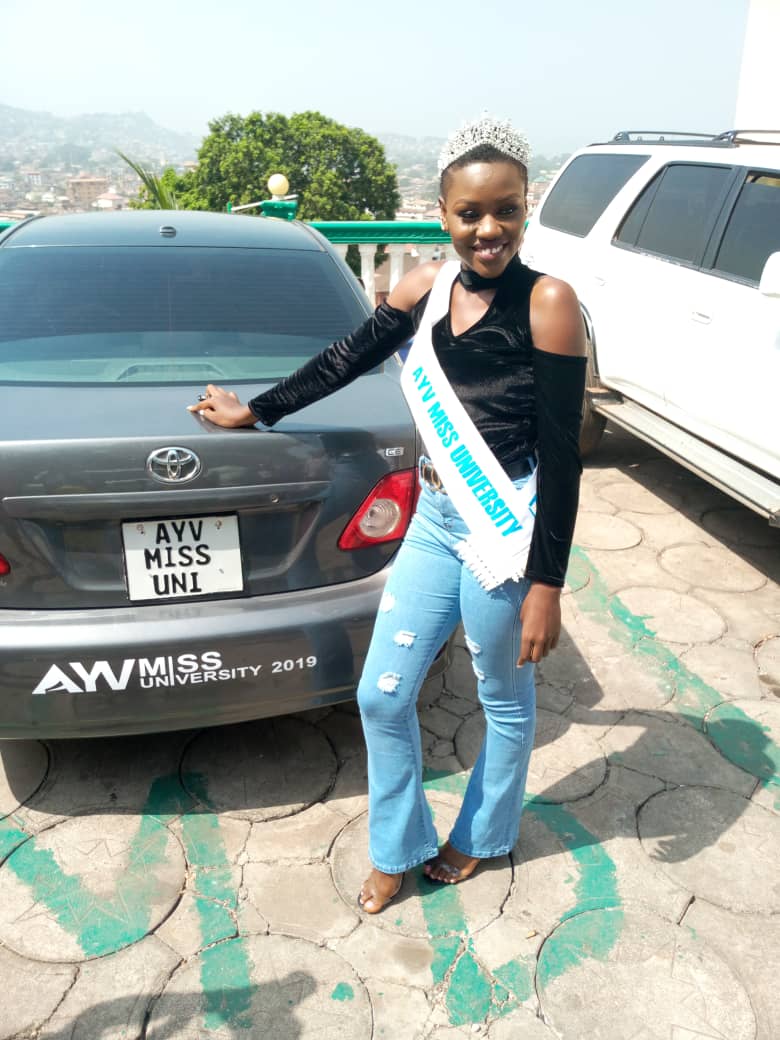 On Tuesday 24th December 2019, the Queen and ultimate winner of the AYV Miss University Beauty Pageant, Hajaratu Kamara, officially received the Star prize of a new Toyota Corolla salon car from the media empire, at its Tower Hill offices in Freetown.

Speaking during the handing over ceremony, AYV’s Phebian Swill, said that it has been the usual tradition of the Africa Young Voices (AYV) media empire to organise such a contest since it was introduced in 2011. She added that seven Queens have been crowned since 2011 and have all been given very attractive prizes and this year’s winner, Hajaratu Kamara is the eighth Queen. She maintained that whatever the institution decides to offer as the Star prize to the winner, it has always delivered. This time they have provided a new car for the winner and Hajaratu is the lucky winner. As she handed over the keys of the vehicle to the new queen, she called on the media, who witnessed the ceremony, to accompany the Queen and the AYV team as they inspect and hand-over the vehicle to her.

Visibly elated and in the company of her friends, the latest ‘AYV Miss University Queen’, Hajaratu took the keys from Madam Swill and majestically opened her vehicle, sat on the driving seat and turned the engine on amidst cheers from her friends.

Speaking after observing her prize, Queen Hajaratu said that she is delighted to have won this enviable prize and praised the AYV and all her fans for the support. She encouraged others to come on board on every such contest and stand a chance to be a winner like her. Asked what her plans for the future will be, she said she is desirous of providing a platform to advocate for female hygiene. When asked why that platform, she said she was a victim, as when she was a kid, coming from humble background, she began using cloth as pad during her menstrual circle and is determined that all her female compatriots are not subject to similar risk as they grow up in life. She called on like-minded individuals and institutions to join her in her campaign to provide young underprivileged girls with sanitary pads in schools and communities.

Queen Hajaratu Kamara was born in Kenema and is presently a final year student in Language studies at Fourah Bay College (FBC). She was among 30 who contested for the enviable position, and also one of the twelve that made it through to the final. Out of that number two dropped out of the way for various reasons, leaving only ten contestants. Last Friday, after what has been described as the battle of the titans, the performance of Hajaratu captured the voters and she eventually won the ultimate prize and was crowned AYV’s Miss University 2019 and on Tuesday, 24th December, Christmas Eve, she was officially handed her prize, a Toyota Corolla Salon car. 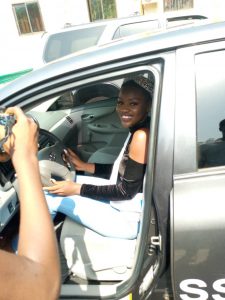 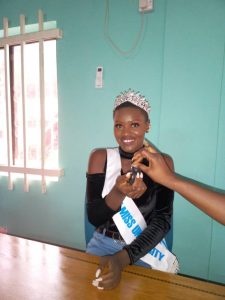 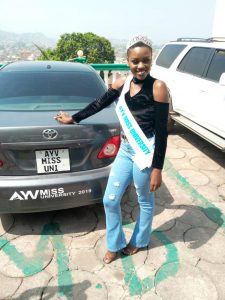 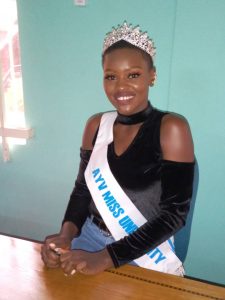 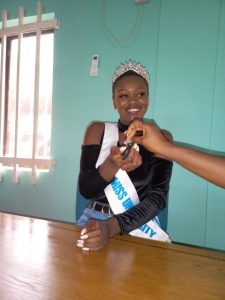