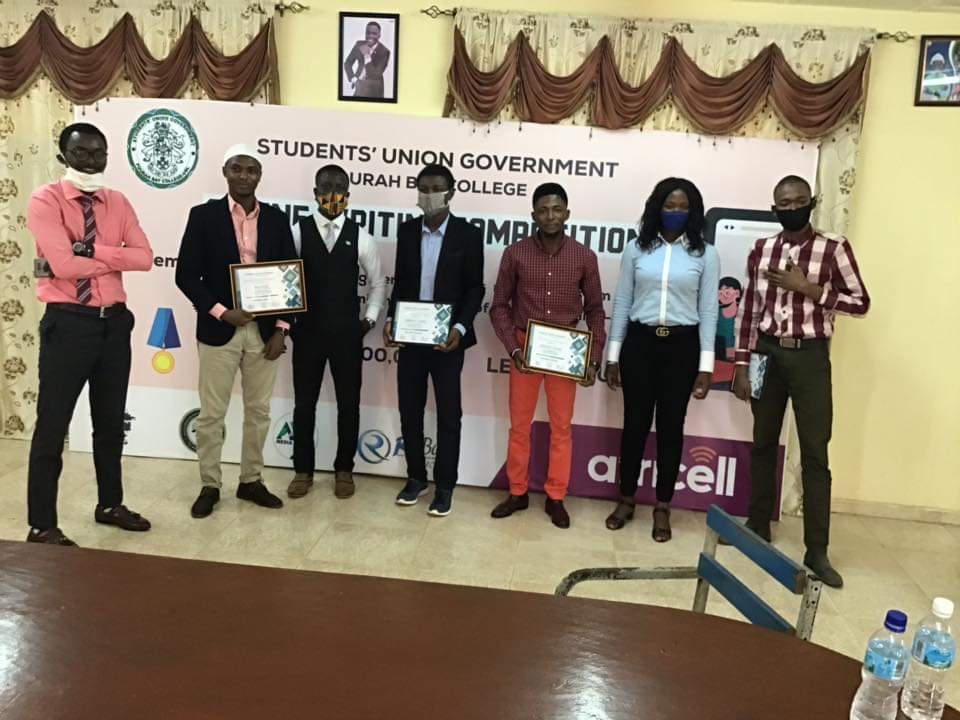 On Monday 18, May, 2020 the Fourah Bay College Student Union Government awarded cash prizes and certificates to the first set of winners of their organized Online Writing Competition during an auspicious ceremony held at the college campus.

The Union gave a total of Le1.7 million to the first, second and third runners-up and also presented Certificates of Merit to the fourth and fifth runners-up.

He further disclosed that the Online Writing Competition is a great step taken by the Student Union Body to keep students mentally active during this period of the COVID-19 pandemic maintaining how he believes that he has a moral duty to serve the interests of students at all times further noting that the competition is also geared towards achieving their dream of rebuilding Fourah Bay College.

He expressed the view that if FBC is to grow again as a college, they must imbibe in students the fundamental academic practices of which writing is very key.

“We have developed lazy attitudes to imbibe and actualize those practices and that is adversely affecting our standards. We must bring them back and this writing competition is an action to endorse that ,” he asserted.

He ended by  calling on potential sponsors to see reason why they should invest their resources to the project which he described as not only important but also timely during a moment like this when the country is been hit by the COVID-19 with the closure of schools and universities across the country as some of the negative effects.

Minister of Education of the FBC Student Union Government, Madam Pleasant Kargbo, also expressed gratitude to the winners of the online writing competition. She disclosed that the Online Writing Competition received a total of two hundred and fifty articles of which thirty scripts were disqualified for not meeting the laid down criteria and two hundred and twenty scripts being processed for the competition.

He noted that it was a rigorous process for the judges but commended them for being up to the task underscoring how she believes that the integrity of the judges demonstrates the credibility of the competition.

Minister of Social Welfare of the FBC Student Union, Abubakarr Dukullay, who also doubled as the chairman for the award ceremony assured the public that the process was very credible and encouraged every student of Fourah Bay College to compete in the future.

Ishmaila Jalloh, of the Mass Communications Department, who took the first position, expressed appreciation to the FBC Student Union body for organizing the writing competition which he said was a move in the right direction for the college as a whole.

He said that he never knew he could attain that feat but was very confident adding that because of the calibre of the judges he saw on the flyer he was convinced that they have the expertise and were fine breeds with unquestionable integrity and wisdom.

He urged colleague students to take the writing competition serious and also sees it as an opportunity to explore the potentials that are in them.