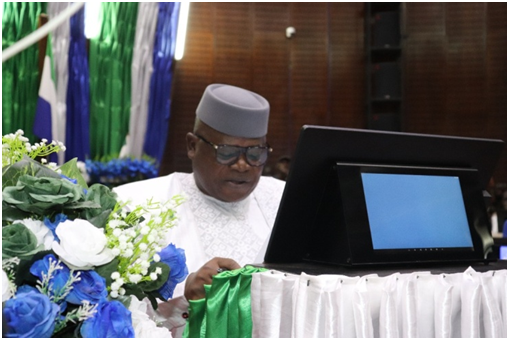 A Bill entitled “The Appropriation Act, 2023” was presented by the  Minister of Finance, Dr. Dennis K. Vandy,  on Friday 11th November 2022  to  Parliament, on the theme,” Addressing The Needs of The Vulnerable in The Context of Multiple Crises”,  with the view of authorizing expenditure for the services of Sierra Leone.

The event attracted several important personalities including Ministers of Government, international partners, professional Heads of Government institutions, the media, members of the Civil Society Groups amongst others.

The bill seeks to authorize expenditure from the consolidated fund for the services of Sierra Leone for the year 2023 and other related matters.

Presenting the Bill to Members of Parliament, the Minister of Finance Dr. Dennis K. Vandy said since 2020, Sierra Leone, like the rest of the world, has been experiencing multiple crises brought by the Covid-19 pandemic and the Ukraine-Russia war. He also said it had disrupted supply chains negatively on the world and it had affected the Sierra Leone’s economy negatively. The Minister said the war in Ukraine has exacerbated the shortages of key essential commodities, causing a sharp rise in the prices of food, fuel, and fertilizer to unprecedented levels.

He said in order to mitigate the shortages of food, the Government had maintained zero import duty on GST, on imported rice and went to highlight the number of subsidies put in place by the State on commodities imported into Sierra Leone.

The Minister in his presentation also, highlighted the achievements so far in the areas of education, agriculture, security, energy, water sector, and more.

The Minister said following the resumption of the mining industries Government has realized improvement in revenue mobilization through its export activities.

He also said in light of the difficulties of the economy, Government would continue to expand and support vulnerable groups and also improve the socioeconomic development of the State, and went on to  underscore that, Government would continue to support and improve the human capital Index by improving the student loan scheme and upgrading Universities.

On exchange rate policy, the Minister said the Government would continue to work on the banking system to ameliorate inflation  and went on to note that, the 2023  budget would not increase any tax rate for the following year, but said it would strengthen the tax revenue base for already existing tax legislation.

On salary and harmonization, he said the government would present a bill to Parliament to address the latter, and also went further to state that, strong policy would be put in place to address financial and fiscal management. The Minister said the 2023 budget would address additional recruitments of police officers and health workers.

In concluding, the Minister said the projected increase in economic activities, and domestic revenue for the financial year 2023 is NLe. 9.35 billion.

The Minister commended the President and his team for continuing to demonstrate leadership in planning and implementing development programs for improving the welfare of the people, and also went further to commend international partners in supporting Sierra Leone, relative to financial and human capital development.