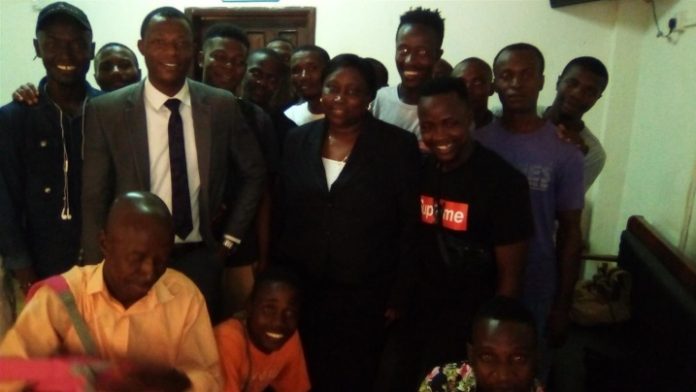 The Legal Aid Board has on Monday, 9 November 2020 paid out eighty million leones (Le80, 000,000) owed to 21 former casual workers of GITEX Company in terms of salary arrears and benefits.

The Legal Aid Board was able to achieve this milestone after three years in the Industrial Court. It all started on 26 October 2017 when the Board received a complaint against GITEX from 15 of its employees accusing the company of refusing to pay backlog salaries and benefits. It emerged the employees had been casual workers for several years, some for 16 years.

The 15 affected employees at the meeting made it very clear that they were no longer interested in the job. Ibrahim Sesay a Machine Operator said he has had enough after working as a casual for fourteen years and was paid Le 29,000 (U$ 3.8) per day with no allowance.

Efforts at reaching a peaceful settlement was thwarted by the insistence on the part of  the two representatives of GITEX that they had not broken any labour laws and therefore do not owe the workers anything.

The Personnel Manager of GITEX, Sembu Sesay, in a lecture style manner stressed that casual workers are taken on a weekly basis depending on the work that is available. The Public Relations Officer for the company, Francis Konneh, said their policy on casual staff is informed by the advice they received from the Labour Office in the East. He added that the Labour Office had advised that the company can maintain staff as casuals as long as they are not made to work for six uninterrupted months without a break.

The Executive Director of the Legal Aid Board, Ms. Carlton-Hanciles on her part condemned the idea of maintaining workers as casuals for months and sometimes years which she noted is unacceptable and vowed to take the matter to court. “These people have worked diligently for you for several years, they do not deserve to be treated this way,” she said. “Considering the number of years they have served, the company is indebted to them in a big way.”

She also accused the company of designing a rogue system which deprives Government of revenue, deny workers the minimum wage and contribution to the National Social Security and Insurance Trust (NASSIT). She further noted that the system is designed in such a way that the workers are not entitled to Annual Leave, Sick Leave and Allowances.

Upon the collapse of the negotiation, the Board went ahead and brought a class action on behalf of former GITEX workers in the Industrial Court. The Board wants GITEX to pay salaries owed to the workers which must not be below the minimum wage of Le500, 000 (US$58) per month. Also, the salary must not be uniform because the workers had different skills and therefore served in different positions. Since they were no longer interested in working for the company, their benefits and entitlements must be paid in full. Moreover, NASSIT contribution should be paid for all the years they had worked for the company.

Legal Aid Counsels also proceeded to file an application for an order to issue a writ for execution of judgement for and on behalf of the plaintiffs. The said application was moved on 12 October 2018. The matter was adjourned for ruling.

The judgment in default of defence dated 24 August 2018 was set aside by mutual consent of the parties and the Honourable Justice Mohamed Sengu Koroma of the Court of Appeal at the time ordered on 29 November 2018 for the defendant to pay cost to the plaintiffs, and also for them to file their defence not later than 10 days from the date of the action, and for the plaintiffs to file their reply and close pleadings.

In compliance with the said order, Legal Aid Board Counsels representing the plaintiffs filed a reply to the defence of the defendant. At this point, both parties agreed to an out of court settlement which culminated in a consent judgment in September 2020 to which the GITEX agreed to pay eighty million Leones to its former workers.

Speaking to the clients before receiving their monies, the Executive Director of the Legal Aid Board, Ms. Fatmata Claire Carlton-Hanciles thanked them for their patience. “I knew from the outset that it was not going to be easy because our labour laws are against you; they leave you prone to abuse and exploitation by greedy and selfish employers,” she stressed, adding, “I knew what they did to you was a human rights abuse and was also unjust. We therefore decided to go to court as a last resort due to the lack of cooperation by GITEX.”

She encouraged the former workers to use the money wisely towards their personal development and also described this case as a victory for casual workers around the country which will lead to more class actions by the Board on behalf of thousands of workers who find themselves in a similar situation.

“This is a serious human rights abuse which we will fight in the courts with all the energy that we can muster,” Ms. Carlton-Hanciles said, adding, “We secured backlog salaries for 140 former workers of MSF Construction Company (MSF Engenharia) after they were abandoned by the foreign owners of company. We will do the same for others,” she affirmed. 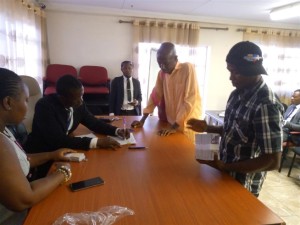