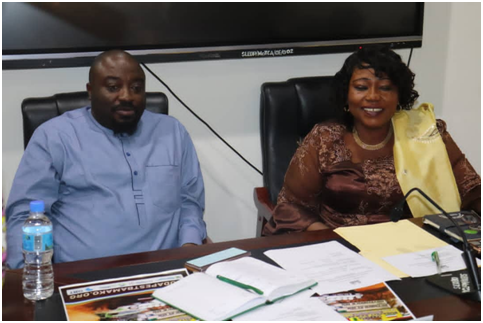 A confirmation has been made on the 1st September, 2022 that Sierra Leone will for the second time be the host country for the finish line of the 2022 Budapest-Freetown Challenge. That confirmation was made known to the Media by the Ministry of Tourism and Cultural Affairs (MTCA) and the National Tourist Board (NTB).

The General Manager of the National Tourist Board, Fatmata Hamid-Carew recalled that the Ministry and its agency, the National Tourist Board launched the Budapest-Freetown Challenge in February 2022, but due to the effect of the COVID-19 outbreak and the closure of borders of participating countries, there were doubts that the event would hold this year. She was, however, pleased to inform the gathering that the Budapest Rally 2022 will be hosted in Sierra Leone.

The Director of Tourism, Mohamed Jalloh told the gathering that because of the fruitful and effective collaboration with MDAs, including the Office of the President, the Ministry of Internal Affairs and the Sierra Leone Police, the 2020 rally in Freetown was successful and that is why the event is being brought to Freetown again as the final destination.

He said this year’s rally has attracted 566 participants with 242 vehicles to participate from the start line further explaining that the rally begins from Hungary to West Africa through the Sahara, it passes through Hungary, Austria or Slovenia, Italy, France, Spain, Morocco, Western Sahara, Mauritania, Senegal, Mali, Guinea and ends in Freetown.

He continued that the rally will enter Sierra Leone through Gbalamuya on the 6th November, 2022 and the finish line ceremony will be held on the 8th November, 2022 with President Bio as the Keynote Speaker.

The Minister of Internal Affairs, David Panda Noah said he is excited to be part of the rally again having been involved in 2020 event during his time at SLRSA. He called on Sierra Leoneans to work with the Ministry and the security sector to ensure that the visitors are safe while assuring that his Ministry will play its part in ensuring that the event is done in a safe and secured environment.

In her address, the Minister of Tourism and Cultural Affairs, Dr. Memunatu Pratt expressed delight that the event is happening again in Sierra Leone, saying that for them to deliver on this mandate there should be a strong collaboration between her Ministry and other MDAs as it happened during the 2020 rally in Freetown.

She maintained that Sierra Leone got remarkable commendations for the way they handled the finish line in 2020 and it was considered the best destination since they started the rally in 2005, hence they are hosting the Budapest-Freetown challenge in 2022.

The Minister said bringing over 600 visitors to Sierra Leone shows a strong registration of international confidence in Sierra Leone in terms of safety, collaboration, hospitality and cultural awareness.