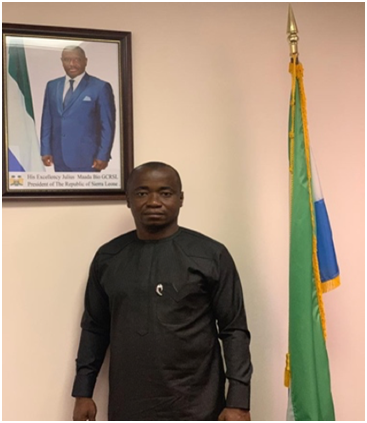 Babadi Kamara, a well known  businessman and sports personality has, in recent times, undertook massive anti-violence campaign in the Southern province of Sierra Leone targeting young people in that part of the country.

According to him, the aim is to give hope to young people and encourage them to be responsible citizens.

Kamara who is well known for transforming the lives of young people through sports and other development spheres is of the view that young people are key to the development of a nation like Sierra Leone.

Many have seen his recent move as complementing President Bio’s youth development agenda, which he stated in his May 2019 State Opening of Parliament speech, noting that “In the New Direction, we shall continue to view youth unemployment as a human capital development and security challenge and will adopt a holistic, integrated and coherent approach to create jobs. This was the explanation for the adage in 2008 “global” and now “de gron dry”. It is imperative that we robustly address the challenge of youth unemployment.”

“We can only develop our nation when we are united and peaceful,” Kamara told young people in Bo City and added that they must be responsible, willing to learn, hardworking, and committed to transforming their communities and nation. “We only have one Sierra Leone that we must be proud of. Let us say no to violence and embrace development at all levels,” he told the youth.

Through his Leadway Company, Bo Rangers Football Club, and other businesses, Babadi Kamara has employed the services of hundreds of young people directly and indirectly as part of his own contribution to nation-building.

Young people, he said should reject the spirit of fear, discrimination, and division among people because this is poisonous to national development. “Violence endangers our hopes of peace and building inclusive societies. You should be partners of Government and Government programs,” he urged young people.

Kamara is not only famous for promoting sports in Sierra Leone he has provided seed monies to mostly young people with the sole aim of enabling them to become self-reliant. His key focus however has been on education, which he had described as the path leader of the youth. “It is with the help of education that the youth can choose and seek their interests,” he stated and goes with the conviction that they choose their ways and directions of lives and furthered that education is important to young people because it provides youth with tools and critical skills to employment, provide for themselves and their families.

It could be recalled that Babadi Kamara provided education support to Bo Secondary School as his contribution to the Free Quality Education Project by donating essential learning materials.

He said the donation was part of his continued effort to complement the effort of His Excellency the President Brigadier (Rtd) Julius Maada Bio in providing free and quality education for primary and secondary school pupils in Government and Government-assisted schools.

He noted that education is the most powerful tool to overcome poverty and many socioeconomic challenges in society. “Everyone should prioritize learning as it is the key to enhancing individual, community, and national development,” he reiterated.