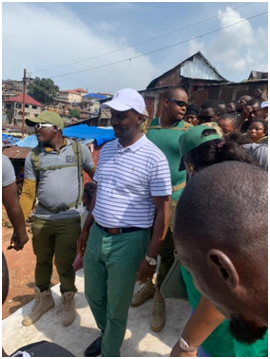 The Masjid Maruff commonly known as Limba Mosque situated within the Kuntorlor Community in the East End of Freetown was the place of worship where, on the 14th October 2022, Mohamed Gento Kamara and entourage observed Jummah Prayers amidst the mammoth crowd that has already turned out simply because the news had made the round that he will be worshiping there on that day.

Even before his arrival hundreds of Muslims and non-Muslims stood patiently waiting to wave and have a hand shake from the man of the moment, Chief Gento.

As he arrived, he was welcomed by the Chief Imam and other Muslim Clerics as well as community leaders. After saying prayers, Mohamed Gento Kamara addressed the congregation by intimating them that he deliberately decided to worship with them with a view of informing them of his decision to vie for the Mayoral position of the Freetown City Council come 2023.

He said he has been in the shadows for a while but has decided to come out in the open to serve the nation adding that one of the things he really  wants to instill in people residing in the city is that tribalism is a dangerous cankerworm that undermines progress. He called on all to resist tribalism and consider ourselves first as Sierra Leoneans that are ready to embrace development.

“Unity is strength,” he told them admonishing all to be law abiding and refrain from violence.

Gento said indeed the world, including, Sierra Leone is going through hard times but commended President Julius Maada Bio for his commitment to chart a new direction for the country through hard work. He added that if only there were no constraints brought about by the COVID-19 outbreak and the Russia-Ukraine war the current SLPP Government, headed by President Bio should have accomplished much to benefit the majority. Gento added that there are indications that significant changes will take place.

He also informed about his determination to change the face of Freetown and make it become more cosmopolitan than it is by ensuring that residents have access to essential or basic amenities.

On their part, the Muslim leaders and community stakeholders thanked him for deciding to worship with them. They commended him for the good work that he continues to do and promised to throw their lot behind him.

The rapturous welcome that residents of the Kroo Bay Community , one of the most deprived communities in the Freetown Municipality greeted the highly respected, result-oriented and unassuming Mohamed Gento Kamara, on Saturday, 15th October, 2022 was so electrifying and overwhelming to the extent that it speaks volumes of a forgone endorsement by majority of the people residing in that community.

Before the arrival of Mohamed Gento Kamara and his entourage, the Kroo Bay Community Field was already jam-packed. with residents, thronging with people from all walks of life some from the environs,  noisy as music was blasting from loud speakers and people were seen chatting in various groups.

As he disembarked from his vehicle, the crowd went wild as it shouted from all the corners of the field, “Gento, Gento, Gento” as the man of the moment waved on.

Received by the community authorities, Mohamed Gento Kamara respectfully greeted the relevant community stakeholders who welcomed him and his entourage.

Addressing the mammoth crowd that has converged to listen to him, Mohamed Gento Kamara, informed the residents that it is his intention to vie for the Freetown City Council Mayoral Seat come 2023.

He told the crowd that the chief motivating factor why he decided to throw his hat to the ring or to vie is to change the tribalism narrative that has eaten into the political fabric of the Freetown Metropolis. He said the city of Freetown is a melting pot where people from various ethnic backgrounds reside and where equal opportunities must be made available. Gento decried how tribal politics has divided Sierra Leoneans not only in the city but the country as a whole.

“It is high time for us to change that narrative so that we will refrain from practicing politics along tribal lines as we have seen that such only stifles socio-economic development and deepens poverty,” he stated adding that he believes he possesses certain qualities that speak to transcending tribal bias.

Gento said he hails from a family in which his father is Temne, mother Limba and having a wife who is Mende by tribe. “So you see, I cut across the three major tribes in the country which gives me the impetus to endeavour to unite the tribes in the metropolis,” he assured revealing how, as an initial step, he has already engaged all the Tribal Heads in Freetown.

The Chief Executive Officer of Gento Group of Companies , Mohamed Gento Kamara, intimated the Krootonians that there is a need to sustainably transform the city by ensuring that critical infrastructures or social amenities befitting a city are provided to positively impact lives. He stated that to that effect he intends and wish to ensure that street lights are installed on all the major streets in Freetown and to improve on water supply to private homes.

The SLPP Chairman of Constituency 125 at Kroo Bay Community, Alhaji Komba, stated that being a development oriented personality there is the greatest possibility that Gento will deliver Freetown including Kroo Bay. He underscored that he is a young man who has contributed to beautifying the city through the construction of the Hill Cut Road expressing the belief that if he is given the platform he could replicate the same feat by beautifying the whole city.

Alhaji Komba said they are also grateful to Gento for reconstructing Little Kroo Street that leads to Kroo Bay and also the road that leads to Spaine Community.

He also expressed gratitude to Mohamed Gento Kamara for rehabilitating the steps leading to the community and for proposing to construct the bridge and a retaining wall which has been their cry for a long time now.

Chairman of the Kroo Bay Community, Charles Karoo, stated that it has been a long time since politicians have been making promises and not fulfilling them. He said what Gento has done has actually proven to them that he is capable to serve effectively and efficiently. He therefore pledged his support promising to convince others to do same.

Most of the residents interviewed stated that though some of them are supporting the APC Party but because of Gento’s intention to contest they will now throw their weight behind the SLPP come the 2023 Presidential, Parliamentary and Municipal elections.

There is a school of thought which holds the view that the entry of Mohamed Gento Kamara will tilt the political dynamics in the Metropolis. They argue that even though the Freetown or the Western Urban area has been a predominantly APC stronghold, however, the love many, especially the grassroots have manifested for him will definitely shift the voting pattern.

They disagreed with the contention that Gento will be treated like the late Solomon Berewa, whom it was said individuals financially exploited on the false pretext of voting for him but did otherwise. According to them Gento has proven his mettle, has changed lives positively prior to this time of the declaration of his intention maintaining that under such a circumstance hypocrisy will not thrive.