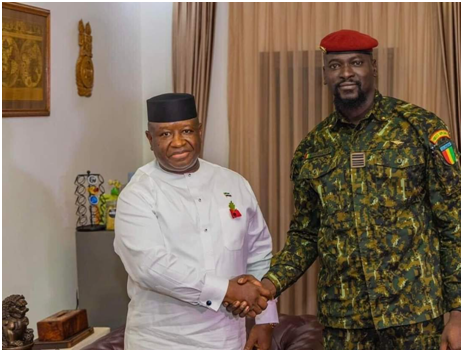 In a spectacular and impressive show of event, His Excellency President Dr. Julius Maada Bio and First Lady Dr Fatima Maada Bio, on Friday 28th September 2022 played host to the Guinean leader,  Col. Mamady Doumbouya, who was on a visit said to be geared towards strengthening of the mutual bilateral relationship existing between the two sister countries.

The meeting was also in respect of proffering solutions on how to maintain private and Government businesses in the two countries and the sub-region.

The Guinean military strongman was received by a high-powered delegation comprising the Vice President, Senior Government officials including the IGP and CDS at the border town of Gbalamuya, Kambia District.

They later head for State House in Freetown where the Guinean Leader and President Julius Maada Bio held bilateral discussions on the peace and tranquility of both sister countries.

It would be recalled that on Monday, 11 October 2021, President Julius Maada Bio departed Sierra Leone for Conakry, Guinea on the invitation of the Military Head of State, Colonel Mamady Doumbouya.

During the one-day working visit they discussed security co-operation issues between the two neighbouring countries, the restoration of constitutional order in the Republic of Guinea and the ECOWAS democratic transition roadmap.

The Guinean Head of State departed Freetown for Guinea at the end of his one-day working visit.

It could be recalled that President Bio visited Guinea’s Military Leader on the 11th October, 2021 to engage the new military strongman about defence issues between the two neighbouring countries.

According to BBC Umaru Fofanah, President Bio is the first head of state to visit the country since ECOWAS slammed sanctions on the regime following the takeover.

It has been speculated that the Sierra Leone leader pushed for the final resolution of the issue of the disputed border town of Yenga and the joint security patrols along the two countries’ borders which stalled following the September coup.

Also speculated was that the new military Head of State, Col. Mamady Doumbouya briefed his guest on their plan of transition to civilian rule.

However, according to the Vice President, Mohamed Juldeh Jalloh the Guinean Head of State, His Excellency Colonel Mamady Doumbuya was on a one-day working visit to His Excellency President Julius Maada Bio to bolster the strong socio-economic, cultural and political ties between the people of Sierra Leone and Guinea.

In response to certain criticisms made against the heavy security that accompanied the Guinean Head of State, a one-time Defence Minister Karefa Kargbo has this to say: “I actually loved seeing a well organized and well-equipped military/security convoy rolling. All vehicles totally fit for purpose. Don’t see any disrespect in welcoming a brother plus his forces who stood side by side dying with us during the war. Maybe we need to respect our President’s security a bit more.”

Legal Link Gives 10 Reasons why ECSL Boss Must Be Sanctioned