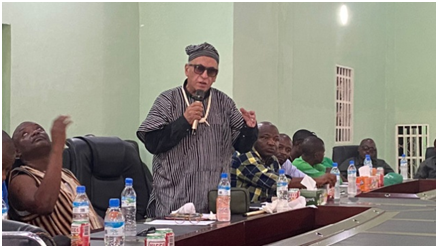 Physically challenged persons in Kenema were on the 10th October, 2022 proud beneficiaries of motorized and non- motorized wheels chairs that were donated by Dr. Adonis Abboud during an impressive ceremony that took place at the Kenema City Council Hall on Maada Bio Street.

Presenting the wheelchairs to the beneficiaries, Dr. Adonis Abboud said, “Disability is not Inability” further underscoring that people who are physically challenged are as equally important as any other member of society.

He explained that it was during an invite to the opening of the Kenema Youth Centre by the Leader of Government Business, Hon. Mathew Sahr Nyuma, that he felt compelled to do something, to empathize with the physically challenged disclosing how such was why he decided to pledge the wheelchairs.

According to him the presentation of the wheelchairs was a fulfillment that pledge disclosing that the items donated include 5 wheelchairs, 2 motorized with their own batteries and chargers, while the other 3 are standard,” he said.

The philanthropist, diplomat and businessman also pledged to provide another set of wheelchairs.

In his statement, Hon. Mathew Sahr Nyuma explained about Dr Adonis Abboud’s numerous philanthropic activities in Sierra Leone. He said that democracy is all about the people saying such is why they are working relentlessly to provide for the basic needs of the ordinary people… “That is what democracy is all about to fight for the ordinary people,” he stated

He said Dr Abboud is not a politician but a diplomat who has been in Sierra Leone for over 4O years and has done a lot for Sierra Leone. “So it is not new to relate with him to help…”

He said we need to work together to develop Sierra Leone. Hon. Nyuma said he who feels it know it.

“It is because we are empathizing with you that is why we have provided these wheelchairs for you,” he said.

Hon. Nyuma admonished the beneficiaries not to sell the wheelchairs. “These wheelchairs are meant to make you comfortable; it is not for you to sell. If you are caught selling them you would be canceled and would never receive any benefit from us in the future,” he warned. 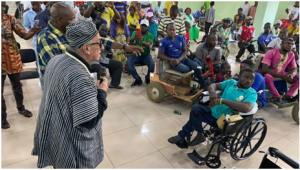 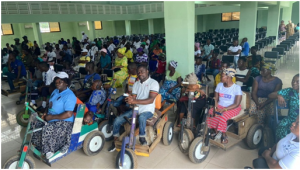 Interacting with his ‘Subjects’ on the One Hand….   Dr Adonis Abboud Enjoins Well Meaning Individuals to Care for Orphans

Facilitated by Dr. Adonis Abboud…   3 Bag Scholarships to Study at University of Belgrade

3 Sierra Leoneans Off to Belgrade University On Scholarship