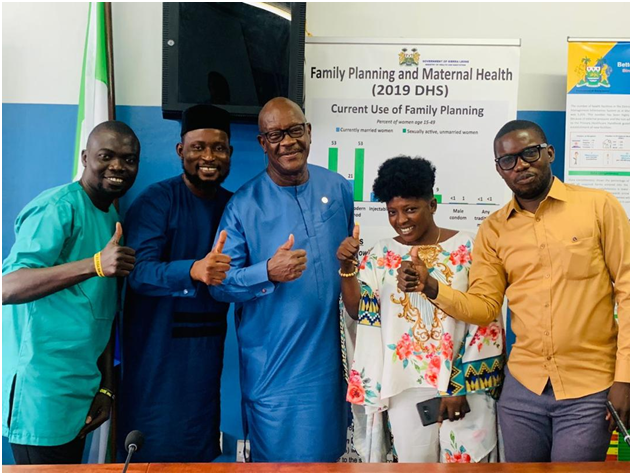 Fruitful discussions were held on Friday 19th August 2022 between the Minister of Health and Sanitation, Dr. Austin Demby and Executive members of the Health Reporters Network Sierra Leone (HRN-SL)  at the Minister’s  Youyi Building Office in Freetown.

The meeting was for HRN-SL to acquaint themselves with the Minister and for them to chart the way forward for better reporting on health as the media have the tools to do so.

HRN-SL National Coordinator, Swahilo Vandy, pointed out that HRN-SL is poised and determined to see that the right messages are taken to the people but stressed such could only be achieved through effective collaboration with the Ministry.

He underscored that the HRN-SL is a non-profit making media organization that promotes health issues in the country and with the mission of reaching out to every community in Sierra Leone with key health and safety messages that will positively change behaviours and lives as well as report health issues affecting them.

Swahilo informed the Minister about HRN-SL’s  plans for an annual national health festival and the opening of a Trust Fund Account for health journalists to specifically report emergencies and outbreaks while commending media houses managers and editors for their support to health journalists to cover health stories under limited resources.

“The trust fund account will support our members, mainly media practitioners, to undertake investigative assignments across the country geared towards promoting the health sector,” he stated and sought the consent of the Minister to do the official launch of the trust fund.

The Minister of Health and Sanitation Dr. Austin Demby, in his response, expressed delight  for meeting with the Executive of  HRN-SL stating that the Ministry is ready to partner with them to share information describing Public Health as one that has a capital P in it which, he said,  is a symbol of partnership between the provider and the recipients.

Dr. Demby, while supporting the need for the Health Reporters Trust Fund, also spoke about the need for HRN-SL to collaborate with the Ministry to organize the National Health Awards come April 2023 maintaining that the first award ceremony served as a motivating factor to all individuals and institutions who are contributing to Sierra Leone’s health sector to do more.

All the above, he added, will be based on strong leadership, partnership and collaboration.

UNOPS & Contractors Given 60 Days to Complete Health Facility in Kailahun