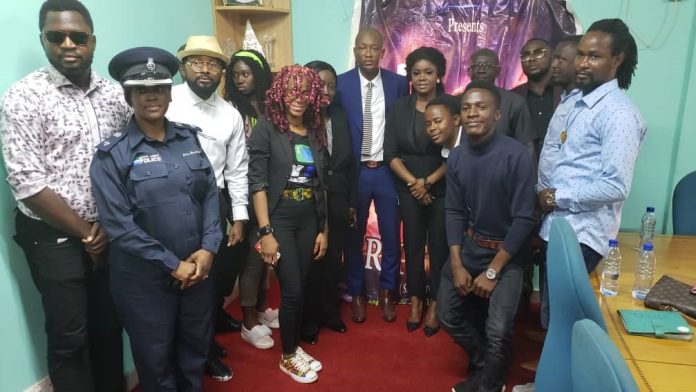 On 28 January 2020 the Deputy Minister of Youth Affairs, Hon. Lusine Kallon, joined the entertainment industry and other line agencies to campaign against drug abuse and other substance misuse among young people.
He said medical researchers have opined that the exact cause of substance abuse is not clear as some are either a genetic disposition which is learned from others, or a habit which if addiction develops, manifests itself as a chronic debilitating disease.
“We inherited a challenging situation with the youth facing the brunt but it is time to act and change the ugly story but we cannot do it in isolation, hence the need for partnership with key stakeholders,” the Deputy Youth Minister stated.

According to him, the recent risk assessment conducted with the United Nations team from New York gave a clear picture of the exact situation of the youths in terms of vulnerability. He stressed that the assessment was to prepare them in addressing the problems of drug abuse and substance misuse among young people.

The Deputy Youth Minister assured that such a partnership will yield positive result in disorientating the negative mind sets of the youth to make them responsible citizens in society.

In her address, the head of Henrietta Mbawah Foundation said the purpose of the press conference is to premiere a movie titled “Crip Town” which was produced after a visibility study on the current situation of young people.

“Our study alluded to the fact that the system has cracked and we needed to find a prompt solution,” said Ms. Mbawah.

She said what has worsened the situation are Indian companies that largely produce alcohol at a very cheap price. She therefore encouraged the Government to intervene as many are not using Brewery products because they are expensive.

She also called on the parents to stop protecting a bad child that is a menace in society. She commended President Bio for giving the opportunity to young people to serve at national level in all governance structures of the New Direction administration.

The Deputy Commissioner, National Youth Commission (NAYCOM), Emerson Kamara said drug and substance abuse is a national concern that needs action.
He said, “We have made a lot of commitments and what we are looking forward to now is real action.” He added that “in moving into real action you identify the key players so that a sustainable solution will be enforced.”

Lagumba Keili- Director of Planning, Interagency Relations and Strategic Communications, Office of National Security said youth indiscipline and lawlessness have become an existential issue in the country and therefore recommended for a national conversation on youth issues.
He said 2020 is meant to develop a cohesive strategy and programs for the country underscoring how such a strategy will reverse such an ugly development.

He described the current crop of young people as a ‘lost generation’ and declined that they are future leaders of Sierra Leone.

“Our political leaders have not been able to help the situation,” he said, whilst stressing that they used young people during elections and dump them later.

Legal Aid Board Executive Director, Mrs Fatmata Claire Carlton Hanciles called on her audience to applaud the Deputy Minister of Youth Affairs for his untiring role to address the problems of young people saying “his heart is really in reforming this country.”
“Minister Kallon has done more and he is a household name because he sees himself as one of them.”
She pledged her institution’s support to promote the movie to sensitize the youth.
Chief Superintendent of the Sierra Leone Police, Mira Dumbuya, said they are on track but have limited personnel to man the entire country as according to her, the country has porous borders that are serving as a gate for illicit drug importation. She said they have raided cartel and ghettos to destabilise them. She recommended a multi-sectoral approach to addressing the problem.