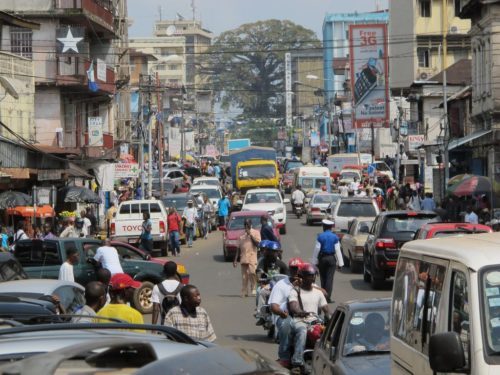 From reliable sources, this medium has learnt that it is undeniable that the traffic congestion in Freetown has recently been minimized by the current Mayor of Freetown Yvonne Aki Sawyer who has employed the right kind of remedial measures.

Through her leadership skills, the once traffic congestion areas of Kissy Road, Goderich Street, Lumley Market, East End police, Abacha Street, Shell, etc, are relatively calm with traffic flow and ease of pedestrians’ access. This timely intervention and implementation and enforcement of stringent laws have decreased high traffic and many commuters now have easy access to the vicinities of the city.

The high traffic jam that once prevented many people plying the Central Business District for work, schooling and other transactions has minimised.  This bold step by Mayor Sawyer has helped even the free flow of goods and services for consumers and further contributing to the socio-economic viability of the city. Environmentally, accidents incurred from Okada injuries and others have decreased.

In the past, authorities tried to address this traffic issue but their efforts failed probably due to the kind of policies they applied. But for Aki Sawyer, she decided to embed the army personnel in handling the traffic and other environmental problems.

Definitely these and many other plans laid by her would make her succeed and transforms Freetown into becoming one of the most enviable cities in Africa and attracting tourists for investment. As I carefully perused ‘Transform Freetown’ initiative, I can attest that the policies now in place in our beautiful city of Freetown can help Freetown to be ranked amongst the most beautiful cities in the world because Transform Freetown initiative has bunch of goodies to offer.