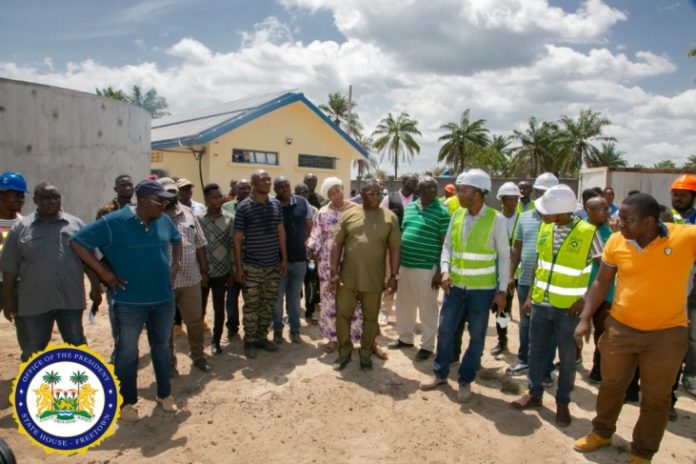 President Julius Maada Bio, on the 19th April 2022, completed a conducted tour of works at water supply sites, mini-grids and roads projects being executed in the Bonthe Township by entities under the supervision of the Ministries of Energy, Works and Water Resources.

Other ongoing projects included those of the Ministry of Energy, delivering on green energy solutions and mini-grid electrification and the Ministry of Works, through its Sierra Leone Roads Authority, working on roads construction. The President also visited and motivated the teaching staff and students of the Bonthe Technical College, now affiliated to Njala University, a rural comprehensive public research university with its main campus in Njala and another in Bo.

It could be recalled that on 19 June 2021 Minister of Energy, Alhaji Kanja Sesay, symbolically erected electricity poles on the Island to mark the physical commencement of the Bonthe City Electrification Project.

He said, at the time, that the Bonthe Island project was behind other township electrification projects in implementation because it was among the second set of towns approved for the project. He had, however, assured that with the erection of poles, contractors were going to accelerate the process of implementation.

On his part, President Julius Maada Bio said he was more than impressed with the strides and conscious efforts made by the Ministry of Energy to increase access to electricity in his home district adding how that was consistent with his manifesto commitments on energy.

In response, President Julius Maada Bio said he was more than impressed with the strides and conscious efforts made by the Ministry of Energy to increase access to electricity in his home district, adding that such was consistent with his manifesto commitments on energy.

He said when completed, the various projects would give Bonthe a social facelift as well as improve the livelihoods of the people.

President Bio concluded by saying that his Government is committed to doing more in the area of energy in every part of the country.