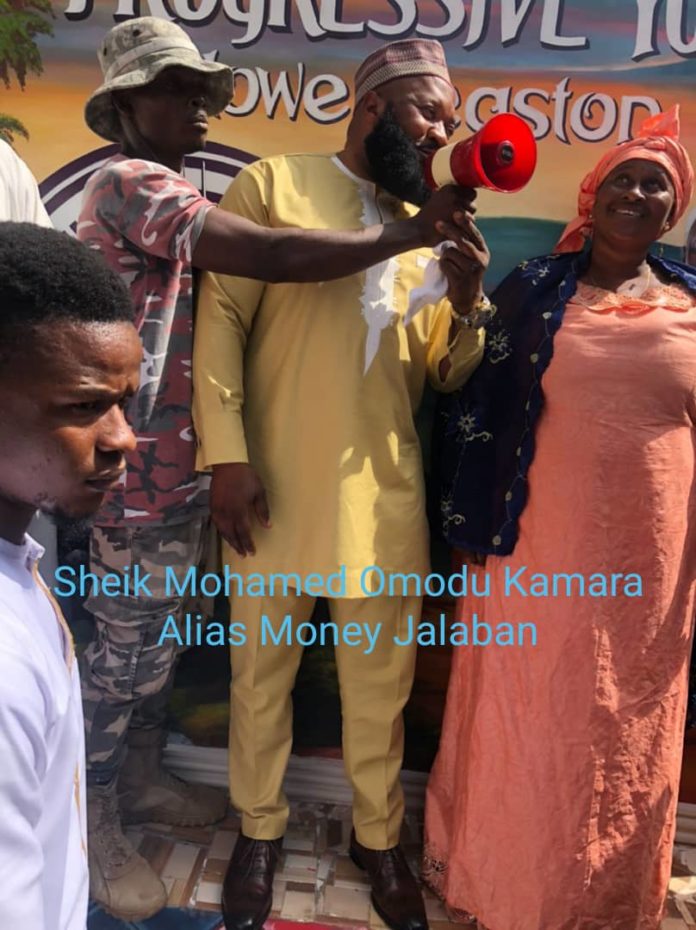 Sheik Mohamed Omodu Kamara alias Money Jalaban, is euphemistically regarded by a cross-section of residents of the East End of Freetown as an angel in human form. Referring to him as such emanated from his humane gestures in the form of rendering assistances and supporting community driven projects.

Showing appreciation for the good things that the scholar and philanthropist has been offering, some residents decided to commission a painting depicting him with most of them maintaining that it is  in recognition of his service to humanity in particular  and nation the nation as a whole. The painting depicting him was done on the wall of 5 Lower Easton Street off Fourah Bay Road in the East End of Freetown.

According to a member of the Easton Street Progressive Youths Organization, David Moiba, the initiative was borne out of  gratitude fuelled by their passion for community development and youth empowerment, adding how  the intervention of  Mohamed Omodu Kamara alias Money Jalaban, in supporting  the actualization of certain community projects is a real blessing in disguise and therefore  called on other well-meaning Sierra Leoneans to emulate his footprints.

It is on record that the media-shy Mohamed Omodu Kamara has tremendously assisted the less privileged, not necessarily those residing within the community, but even beyond. Many will attest that he has been very instrumental in providing  assistances for the construction, rehabilitation  of schools, health centers, mosques and provision of water supply, cash and vocational skills materials including motorbikes, tricycles and vehicles to a cross-section of Sierra Leoneans, especially young people, in a bid to get them off the streets.

In a snap interview, Mohamed Omodu Kamara, intimated that he believes in helping others further maintaining that if Sierra Leoneans are united, show compassion for the less privileged in society then most of the challenges we are confronted with could easily be surmounted.