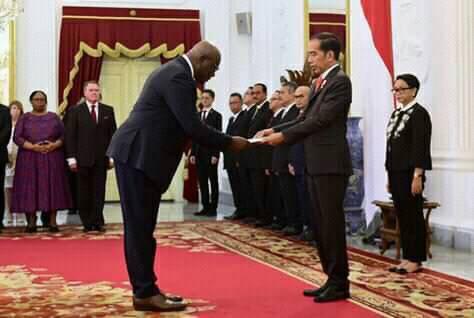 By Samuel Ibrahim Koroma in Beijing

Sierra Leone’s Ambassador Extraordinary and plenipotentiary designate to China and ten other countries, His Excellency, Ernest Mbaimba Ndomahina has presented his credentials to the President of the Republic of Indonesia Joko Widodo at the Presidential Palace of Indonesia.

The occasion commenced with an executive pick up of the Sierra Leone’s Ambassador and his wife Mrs. Ndomahina, and was graced by officials from both the Indonesian government and the Embassy of the Republic of Sierra Leone to in Indonesia resident in Beijing, China.

The national flag of Sierra Leone – green, white and blue – was for the first time placed in front of the executive car with police escort leading the way in the Indonesian Capital, Jakarta.

Upon Ambassador Ndomahina’s arrival at the Presidential Place of Indonesia, he was greeted with a salute from the military, dressed in ceremonial military regalia. After the salute, the sound of the trumpet rented the air, and the ambassador and Indonesian President shook hands for the first time.

Ambassador Ndomahina was part of eighteen (18) ambassadors that were received and welcomed by President Joko Widodo on that same day.

President Widodo stressed that Indonesia attaches great importance to developing relations with the countries and regions of the ambassadors, and was willing to further enhance political mutual trust, deepen pragmatic cooperation and people-to-people exchanges and strengthen coordination and cooperation in international affairs.
“We hope you will play a role as a bridge to make positive contributions to enhancing Indonesia’s friendship with the people of your countries or regions, and promote mutually beneficial cooperation,” President Widodo said.

Ambassador Ndomahina conveyed greetings from Sierra Leone’s President Bio to the Indonesian President, saying that he was willing to commence something that has never been actualized in the history of the two countries of bilateral relation.

In an exclusive interview after presenting his credentials to President Widodo, which automatically makes him the first, and one of the recognized ambassadors in Indonesia, Ambassador Ndomahina expressed his appreciation to God for another height in his ambassadorial career and to H.E. Dr. Julius Maada Bio for bestowing confidence in him to serve this great nation, Sierra Leone.

Ambassador Ndomahina has already begun making his mark in Indonesia, as he has already commence talks with Indonesian State-owned enterprises that have expressed interest, and are very much keen to cooperate with Sierra Leone the area such as infrastructural projects, and its mining sector, which foreign countries hold Sierra Leone with high esteem.