Out of Patriotism & Selflessness…

It was, John F Kennedy, one time President of the United States of America, who in a bid to energize his fellow countrymen to see the importance of engaging in civic action and public service that once said, “Ask not what your country can do for you –ask what you can do for country”.

And it was a great philosopher, Edmund Burke, who stated that, “the only thing necessary for the triumph of evil is for good men to do nothing”.

History, indeed, unfolded on the 18th July 2022 on Mount Aureole, Fourah Bay College, to be precise, as a rare, inspiring and impressive gesture was demonstrated by a patriotic son of the soil, a great Sierra Leonean, in the person of Alhaji Ing. Dr. Mohamed Babatunde Cole, as he donated a $2 Million worth multipurpose Engineering Building to the Government and People of Sierra Leone.

It was indeed a fulfillment of selflessness as well as the requisite response to civic action and his singular action is what any good citizen or man should believe is the right thing to do in order for evil, what is not good for purpose, not to triumph over what is good.

As a proud and grateful alumnus of Fourah Bay College, University of Sierra Leone, Alhaji Ing Dr. Mohamed Babatunde Cole thought it but rather fitting that the best he could give back is to contribute to the infrastructural development of the University.

The donated building is not just a building for the name sake but rather is a solid learning structure that has 6 class rooms, all with whiteboards, 2 auditoriums with projectors, free internet Wi-Fi and a capacity for over 700 students.

To show how important the event was on the 18th July 2022 on Fourah Bay college campus, it was President Dr Julius Maada Bio who commissioned the building, which was named after the sole financier, Tunde Cole Building.

It is indeed a massive modern learning facility that will add to lecture rooms and provide auditoria that are equipped with technology to maximize learning outcomes.

According to President Bio, “Tunde Cole’s profound altruism is in providing this four-storey edifice with two 170-person auditoria, equipped with smart boards and projectors for video/web conferencing and online-content deliveries; six additional virtual learning-ready lecture and conference rooms; and comprehensive WiFi coverage throughout the building. These facilities will serve as remote and hybrid learning hubs at this university for years to come.

“For over a century, we were called the Athens of West Africa for the superior quality of higher education offered in our dear nation. Ours was the international outpost of European education and its mission to train, to shape, and to reinforce the values, principles, and aspirations of young Africans. The result is that we produced some of the best scholars, researchers, philosophers and public servants – people who were driven by a mission to transform their nations; people who shared a core value of citizenship,” he said.

He cautioned cynics who took pleasure in bad news and would rather spread disinformation in order to foment unrest in the country rather than acknowledge how much citizens and leaders were doing to make things better. He noted that theirs was a mindset that would blame the Government for not providing cheap fuel even though they were well aware that the country was not producing or refining petroleum products.

“So, while cynics sit on the margins spreading disinformation and hoping for things to go all wrong, good citizens like Ing. Tunde Cole ask, ‘what else can I contribute to training more doctors, engineers, lawyers, chemists, policymakers, and more, who will transform the future of this nation?’”, he noted, saying that that was what good citizenship was all about.

“It is not about being wrapped in partisanship and fomenting civil unrest; it is about doing the right things at the right time about the multiple challenges we face as a developing nation. On the all-important issue of food security, we have no option but to plant what we eat…We cannot expect foreign countries to plant rice and sell their rice to us at prices we determine. Our food security is our responsibility, hence my Government’s focus on investing in farming,” he said.

Vice Chancellor and Principal of the University of Sierra Leone, Brigadier General Professor Foday Sahr, said they were happy about the beautiful edifice, which he described as modern. He further stated that the building was fully equipped with smart boards, WiFi facility, canteen, offices and lecture rooms that could accommodate up to 700 students per session.

The benefactor and philanthropist, Alhaji Ign. Mohammed Babatunde Cole, in his own words disclosed how the structure was constructed out of love for his alma mater, adding that he knew the university had constraints with lecture rooms when he attended its 190th anniversary, where speakers and college authorities asked for various support from the public.

He went on to thank President Bio for his presence at the commissioning of the building, adding that that was his contribution to the Government’s flagship programme – free quality education. He also thanked his family, the architect, the centurion construction company, a locally owned firm, and all those who gave him support to put up the structure.

Minister of Tertiary and Higher Education, Prof. Alpha Tejan Wurie, described the event as a special one, noting that it was a demonstration that a lot could still be done for Sierra Leone by Sierra Leoneans. He said the massive increase in tertiary education enrolment was inspired by the President’s investment in education.

Giving the vote of thanks on behalf of students of Fourah Bay College, Augustine Bona, said they were thankful to President Bio for commissioning the structure and for putting premium on human capital development, most importantly on education, and for providing school buses for pupils and students. He thanked Ing. Cole, the benefactor, for the kind gesture and assured him that they would use the structure for its intended purpose.

According to a Political Commentator, there are wealthy Sierra Leoneans, in and out of this country who are capable of doing more than what Tunde Cole did but are rather too selfish to share their wealth with others. For others, he said they may be hesitant not to be identified because they amassed their wealth through corrupt means. He, however, maintained that if other Sierra Leoneans could step forward and contribute to the infrastructural development of service-provided public institutions then the burden could be reduced on the Government and the country could be a better place more than it is today.

Indeed, Alhaji Ign. Mohammed Babatunde Cole did not sit idly by, with folded arms, and asked what his country can do for him – but rather has demonstrated what he has done for his country.  There is a lesson for all to learn. 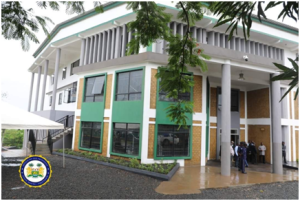