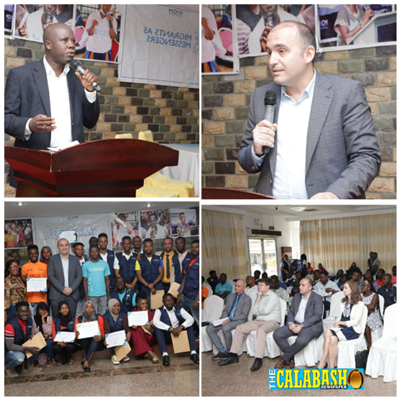 The International Organization for Migration, an entity known for assisting illegal migrants to get back to their countries of origin, held a one day event at the Bintumani Hotel on the 8th September 2022, geared towards enlightening the media about the successes and achievements of a Project it has been implementing known as ‘Migrants as Messengers’ (MaM) which will draw to a close in this month.

Speaking during the programme, the Head of IOM Sierra Leone, Christos Christodoulides, stated that believe that safe, orderly migration is beneficial to individuals and communities, this is consistent with the theme of the event, which is: “Impactful Awareness Raising for the Benefit of Young People and Communities”.

He intimated that a generation of migrants is on the move in West Africa, in the hope of finding a better life for themselves, and their families back home adding that based on figures by IOM’s flow monitoring, in 2021, an estimated 146,043 irregular migrants arrived in Europe, the majority over 112,747 by sea and 33,296 by land.

The IOM Head disclosed that a key route is the so-called Western Mediterranean Route (through Morocco and Algeria), for which Libya is an important transit country with an estimated number of 610,000 migrants in the same year.

He said while most migration in West Africa is intraregional, an increasing number of sophisticated smuggling and trafficking networks lure young people into undertaking the dangerous journey northwards and but also to the Middle East.

According to him, Sierra Leone is no exception to that trend as IOM estimate that 8,000 to 10,000 young people are leaving the country irregularly every year.

Christos Christodoulides said for some being stranded in a foreign country the option of voluntary return facilitated by IOM can be an option revealing how they have provided support to 7761 Sierra Leoneans since 2017, out of which 1474 in 2022.

Among these 7760 individuals, he continued, were protection cases 93 minors, 241 victims of trafficking and 41 persons facing serious health conditions.

He said when it comes to figures IOM has assisted nearly 50,000 migrants to voluntarily return to their country of origin in 2021.

The Head of IOM in the country maintained that Global Migration, which had decreased by approximately 27 per cent during the COVID–19 pandemic, has begun to rebound to pre-pandemic levels.

He said in 2021, IOM assisted 49,795 migrants return to their countries of origin, representing an increase of 18 per cent from the previous year.

“IOM’s doing their best to meet an increasing demand by migrants for safe and dignified returns as well as to support their reintegration into the countries of origin following the lifting of many travel restrictions imposed during the pandemic,” he pointed out.

Christos Christodoulides,  said Niger, Mali and Mauritania remain the top three African countries of return to Sierra Leone in the past years and Lebanon, Kuwait and Oman for the Middle East and Germany for Europe.

He told the audience that the business of smuggling people has been going on for generations but, however, recently expanded access to mobile technology and messaging apps is making it significantly easier for smugglers to connect with and capture the attention and imagination of unemployed or underemployed youth in West Africa.

Christos Christodoulides informed that Migrants traveling along the Central Mediterranean route are vulnerable to human trafficking and exploitation, might face inhumane detention practices and even risk death.

He stated that IOM country missions are regularly approached by migrants, eager to tell their stories in the hope of protecting their “brothers and sisters” from the same risks they were faced with adding that having experienced the irregular route personally, they are best positioned to describe the reality of irregular migration.

According to him, a growing body of research suggests that potential migrants are generally distrustful of information campaigns on irregular migration and that they are more likely to believe information obtained through trusted sources.

He said the project, Migrants as Messengers (MaM), addresses that distrust by encouraging youth in migration-prone communities in West Africa, including Sierra Leone, to adopt new attitudes and behaviors on migration through peer-to-peer messaging.

Christos Christodoulides said with support from the Netherlands Ministry for Foreign Trade and Development Cooperation (BZ), the first phase of Migrants as Messengers project started in November 2017 and ended in March 2019, covering three target countries: Senegal, Guinea and Nigeria.

He stated that Phase two of the project began in November 2019 with the addition of four countries, Sierra Leone, Liberia, Côte d’Ivoire and the Gambia adding that the project will close in the seven countries in September this year.

The Head of IOM in Sierra Leone said one of the concepts of MaM project is that activities should be volunteer led, to the extent possible maintaining that MaM Phase 1 showed that building up the capacity of volunteers took time and investment, and therefore the amount of skills training and capacity building was considerably increased in Phase 2.

He said the objective of the event is to share with participants the results they have achieved in Sierra Leone and want to grasp the opportunity to ‘market’ the migrants’ associations to partners to rally support for them.

The Head of IOM in Sierra Leone said successful and sustainable peer-to-peer awareness raising requires a considerable investment in training and capacity building.

He said a wide range of relevant trainings were made available to the MaM Volunteers, taking into account the communication and technical skills required for successful awareness raising, as well as their psychosocial needs to enable them perform those tasks.

According to him, the objective of the strategy was to continue working on awareness raising and the mobilization of support for volunteers in collaborating with partners.

He said they did not assume that the problems of irregular migration and human trafficking will disappear overnight, that the associations at the center stage here are in the position expected of sound and effective organizations.

Christos Christodoulides stated that in fact, they have conducted a detailed assessment of the internal governance structures of both associations, the results of the assessment shows that significant support is still required to bring the associations to levels that will enable them to be strong and effective but said they remain optimistic and confident that such is achievable.

Concluding, he said it is important to build on the processes that they together with their partners, have set in motion. He claimed that finding durable solutions to minimize the risks of irregular migration require all to work in tandem, to mobilize resources and improve on what has already been done.

He, on behalf of the International Organization for Migration, thanked the Government of Sierra Leone for its unwavering support to the project and other interventions being put in place by their Mission.

He said the event is a speed date, in other words an opportunity for people to quickly meet a large number of people to potentially interact with in the future.

“I encourage you all to meet and discuss with the migrant volunteers to hear about the amazing work they have done and build partnerships that will help to discourage irregular migration and human trafficking and make migration safe and beneficial for all of us,” he enjoined.

He pleaded for the extension of the project as there are more young illegal immigrants out there that need help to return home further assuring them that they, as a Ministry, will put hands together with the aforementioned organization to raise the awareness on the dangers of illegal travelling.

The performance of skits and showing of documentaries depicted the dangers of illegal migration and the need for young people to focus on alternative livelihood engagements instead of embarking on illegal travelling.