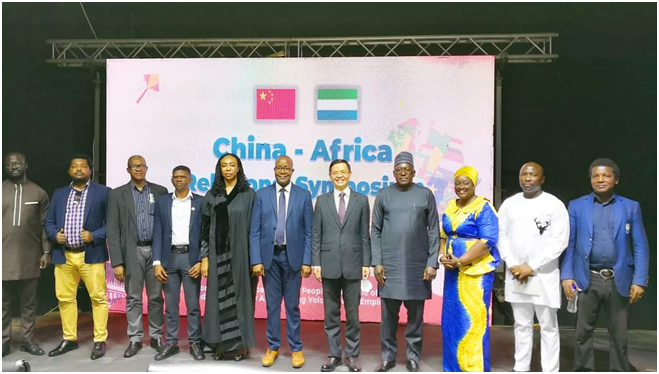 A high level symposium on China-Africa Relations, with the theme, “China and Africa: Past, Present and Future”, was organized by the Africa Young Voices (AYV) Media Empire from the 8th to the 9th September, 2022.

Held at the AYV Media Empire Conference Room on Tower Hill in Freetown, the symposium was moderated by the Samuel Wyse-Bangura, AYV’s Director of Communications and Operations and it was graced by staff of the Chinese Embassy in Sierra Leone including the Ambassador, H.E. Hu Zhangliang, Charles Onunaiju, Director of the Centre for China Studies in Nigeria, Professor Zhang Chun, Senior Research Fellow at the Institute of International Relations, Yunnan University, the Speaker of the ECOWAS Parliament, Dr Sidie Mohamed Tunis, the Minister of Information and Communications, Mohamed Rahman Swaray, his Deputy, Solomon Jamiru, Ambassador Anani Demuyakor from Ghana. Honorable Member of Parliament-Unpha Koroma, Abraham John-Director of Middle East and Asia of the Ministry of Foreign Affairs and International Cooperation ,Executive Members of China-Sierra Leone Friendship Organizations, public officials and personalities from various walks of life.

In his keynote address, H.E. Ambassador Hu Zhangliang thanked AYV Media Empire for organizing the event and all for attending further maintaining that currently, the world is undergoing profound changes and still suffering from a pandemic unseen in a century.

He stated that hegemonism, unilateralism and protectionism are on the rise, with economic globalization facing headwinds as the implementation of the UN 2030 SDG is confronted with unprecedented challenges and the future of mankind is at crossroads.

He noted that China, as the largest developing country, and Africa, as the continent with the largest number of developing countries, have long been sincere friends and have made important contributions to the building of a better world adding that under the new circumstances, China and Africa shoulder more and bigger international responsibilities.

He said 600 years ago, Zheng He, a great Chinese navigator of the Ming Dynasty, led the largest fleet of that time to visit the east coast of Africa four times and contributed to the building of China-Africa friendship.

The Ambassador pointed out that in the 1950s and 1960s and later on, the Chinese Government and People provided firm support to African countries and peoples in the latter’s arduous struggle against colonial rule and strive for national independence.

He talked about how in 1971 friendly countries, including a handsome number of African countries, assisted the People’s Republic of China to restore its legitimate seat in the United Nations highlighting how Sierra Leone was one of the sponsors of the relevant UNGA resolution.

According to him, in 2000 the Forum on China-Africa Cooperation (FOCAC) was established and ushered in a new stage of China-Africa relations.

He dilated on the impressive achievements in China-Africa cooperation since the establishment of FOCAC furthering that by 2021, direct Chinese investment stock in Africa reached US$43.4 billion, up by nearly 100 times from the year 2000.

“China-Africa trade reached US$254.2 billion, more than 20 times the size of 2000,” he stated adding that China has become Africa’s largest trading partner and the major external driving force for Africa’s economic growth for quite some years.

“President Xi leads by example together with his African counterparts in promoting the building of a stronger China-Africa community with a shared future in the era,” he stated.

He talked about the  2015 and 2018 FOCAC summits, the 2020 Extraordinary China-Africa Summit on Solidarity Against COVID-19, the November 2021 8th Ministerial Conference of the FOCAC held in Dakar adding how for 32 years consecutively, Chinese Foreign Ministers have made Africa the destination of their first visit abroad in a new year.

The Ambassador informed that China and Africa have developed and implemented series of cooperation blueprints such as the Ten Cooperation Plans, the Eight Major Initiatives and the Nine Programs for China-Africa cooperation, covering all major areas of development such as people’s livelihood, social and economic progress, innovation, environmental protection, capacity building, and peace and security etc..

He said the China-Sierra Leone relationship is the epitome of China-Africa relations.

“Over the past 51 years, through the joint efforts of our two Governments and peoples, China-Sierra Leone friendly relations have grown robustly and yielded notable results to the satisfaction and pride of both sides,” he said with pride adding that the two countries have established a comprehensive strategic cooperative partnership.

He mentioned that one of the  prominent challenges of the China-Africa cooperation is the external interference and sabotage but  said fortunately, the Governments and people of African countries know clearly who their true friends are maintaining that history and facts have repeatedly proved that regardless of international vicissitudes and other adversities, China-Africa traditional friendship remains as firm and stable as mountains.

He enjoined all to rise above any obstacle and redouble efforts to promote the China-Africa friendly cooperation to a new high.

In his statement, the Minister of Information and Communications, Mohamed Rahman Swaray said the relationship between China and Africa has been very mutual and beneficial over the years. He recounted the numerous supports that have been rendered so far to African countries by China adding that the Government of Sierra Leone is indeed grateful for the timely gestures offered especially during trying moments in the nation’s history underscoring that they resonate with the saying that a friend in need is a friend indeed. He assured of the Government’s continued support of the bi-lateral ties between the two countries expressing hope that the relationship will continue to grow from strength to strength.

Other speakers like Dr Sidie Mohamed Tunis, Speaker of ECOWAS Parliament, Charles Onunaiju, Prof. Zhang Chun, Ambassador Anani Demuyakor from Ghana. Honorable Member of Parliament-Unpha Koroma,Abraham John-Director of Middle East and Asia of the Ministry of Foreign Affairs and International Cooperation made salient contributions bordering on the significance of ties between China and Africa and more especially how that relationship could be well tailored to bring more benefits to the two sides.

The outcome of the group sessions were reported followed by recommendations and new ideas of enhancing a mutually beneficial relationship between China and Africa including Sierra Leone. These were then factored into the various group reports.

Ambassador Anthony Navo, the Chief Executive Officer and Chairman of the AYV Media Empire gave the vote of thanks marking the end of the two-day conference.