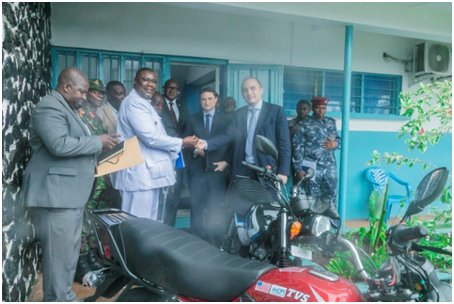 A hand-over ceremony of 30 motorbikes to Sierra Leone’s Immigration Department, Port Health Division of the Ministry of Health, and the Office of National Security (ONS) was held by the International Organization for Migration (IOM).

The ceremony was held on the 17 August 2022 at the IOM Office in Freetown, under the Africa Regional Migration Programme implemented by IOM in Sierra Leone with funding from the United States Bureau of Population, Refugees, and Migration (BPRM).

The donation of motorbikes was geared towards supporting the Government’s capacity to enhance border patrols, monitoring, and security along the Sierra Leone-Guinean and Liberian borders.

“The donation of motorbikes to Government border management units is being made possible thanks to the funds that we received from the United States. With PRM support, we have been able to deliver several activities related to counter trafficking and border management,” said Christos Christodoulides, Head of Office a.i at IOM Sierra Leone.

The Director of Border Security at the Office of National Security (ONS), Samuel AJ Bullie, stated that ONS has enjoyed a good working relationship with the IOM, which spans over ten years, in migration, including border security. Therefore, they valued their relationship with IOM and hoped for continued collaboration.

Bullie further said that, “the donation of motorbikes is an important contribution that will strengthen border security. The bikes will be useful to support the operations of security personnel to conduct border patrols at different land border areas in the country.”

In his brief statement, the Political Counsellor at the United States Embassy in Freetown, Paul Stucky reaffirmed the Embassy’s continued commitment to work with IOM in addressing migration-related challenges. “I am pleased to be here today to witness the donation of motorbikes to border units of Government agencies. I hope this will go a long way to help these units deliver important work in border management. I am looking forward to continuing our partnership with IOM”. 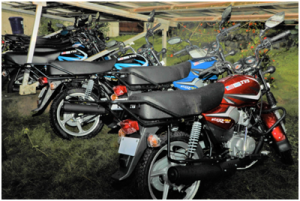