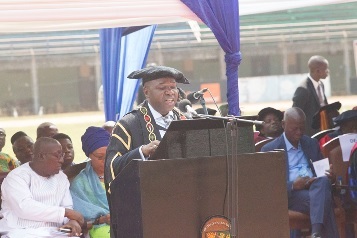 The Deputy Vice-Chancellor and Head of Campus at the Institute of Public Administration and Management (IPAM), University of Sierra Leone, Professor Samuel E. B. Nonie, has intimated a cross section of residents in Makeni about the progress the institution has made so far and the packages they have in store for them in order to make education more accessible and by extension develop their business administration skills.

He said prior to this time, IPAM had presence in different locations in Freetown including the Prince of Wales, St. Edwards Secondary Schools as well as some other institutions in the capital city furthering how today they are based in just one location at the new IPAM building.

He touched on the rapid transformation that is currently ongoing citing the recent establishment of a well-equipped medical centre that is manned by one medical Doctor and five nurses. He said before this new development they were challenged with addressing minor ailments afflicting students but reiterated that such is now a thing of the past.

The Vice Chancellor praised the result-oriented lecturers and other members of staff also underscoring how they are so dedicated to ensure quality assurance is not only achieved but as well guaranteed in the field of academia.

Professor Nonie further revealed to the people of Makeni that IPAM is well placed to increase the number of programmes geared towards meeting customers’ satisfaction. “We want to produce students that will add value to the development and growth of the country,” he expressed determination.

Professor Nonie also disclosed that the recent mass failure in public exams is a big concern to IPAM noting how the occurrence of a problem in one area or one sector of the country is considered to be a problem for all.

He said they are introducing a new programme for those that passed most of the subjects they sat to at the WASSCE level but failed in Maths and English. “This programme is taking education to the people as we are poised to take education to your door steps which will become a strong pillar in our administration,” he added.

“As parents we need to help our children to have quality education in order for them to meaningfully contribute to the nation and IPAM will continue in that direction,” Professor Nonie asserted, adding how the aforementioned programme will not be just like a syndicate but will instead focus on areas where they have noticed that students encountered difficulties. “We will help to prepare these pupils for the WASSCE exams,” he stated.

He continued by stating: “We want to have our own actual building in Makeni and for now we have gone a long way with the architectural planning and the development of our own IPAM structure. We are calling on all stakeholders for their collective support,” the Professor appealed.

The Section Chief of Masorie Town, Pa Alimamy Osman Ntham, thanked the Vice Chancellor for thinking and working towards the development of such a model in the Northern region. “We will always be grateful to IPAM,” he expressed gratitude.

A senior resident, Abdul Rahman Sesay, maintained that this new stride is the biggest intervention IPAM has ventured into with a view to assist parents in the educational development of their children at a time when they are very displeased with the recent public-school examination results.

Director of Strategic Planning and Quality Assurance, University of Sierra Leone, Mr. David Gbao, revealed  that it is not only in Sierra Leone but in Africa as a whole where most times quality services and products provide customer satisfaction which is why their office  is there to support what the Professor is doing to ensure quality assurance with regards high value academic content which he said the University is  delivering.

Margret Sheriff Bangura, Coordinator for IPAM in Makeni, assured the people of Makeni about their preparedness to deliver quality education during the next academic year.

Abigail Amanda Jusu, Administrative Assistant of Short Courses, on her part revealed that IPAM also caters for the working-class people offering them nice packages of tailored courses in order to empower them gain higher qualifications that will put them at vantage positions for promotions in their workplaces.

The Deputy VC was taken on a conducted tour to see the new facilities of IPAM in Makeni and later left for Kono where he had a similar engagement with key stakeholders.