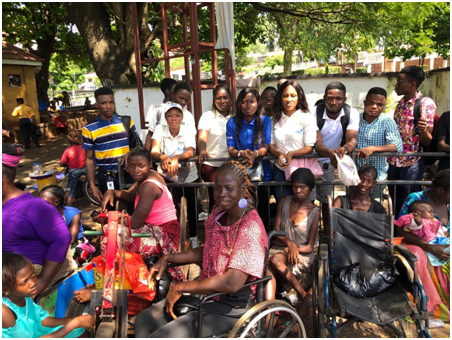 One of the Christian groups belonging to the Institute of Public Administration and Management (IPAM), The Applied Accounting Prayer Group, has generously donated food items and also ministered the word of God to 150 disable persons at the historic Cotton Tree environ in Freetown, on the 25th October, 2022.

From what this news medium learnt, the humanitarian gesture is geared towards helping the vulnerable and needy as it is stated in the Holy Bible.

The donated food items include, rice, maggi, salt and onions.

Silvanus Saidu Kanu, the Founder of the aforementioned Prayer Group intimated that such generosity is a direct command from Jesus further maintaining that, they as an organization, have been donating food items yearly to disable persons and according to him, this is their second annual donation.

Speaking to this medium, Silvanus revealed that, this Prayer Group is a vision from God, which according to him, is to serve mankind, and also preach the gospel to the lost. He continued that as a student of the aforementioned institution, he brought together some of his colleague students of the Applied Accounting Department to form the prayer group.

Silvanus revealed that as an organization they have been facing numerous challenges, especially in terms of bringing together colleague students on campus to preach the word of God to them. Another challenge he mentioned is, the existence of cultism on campus.

“Some people don’t listen to us because of their unbelief, and another challenge we are having is financial constraints, as the group lacks financial support from other sources. It is out of our little savings as students, we use to provide these donated items,” the Founder stated.

One of the executive members of the group, Aiah  Boima, mentioned that the organization is not only there to preach the gospel to the needy but also provide some food items for them, which he says, serves as an act of fulfilling the word of God.

He noted that, the group was able to sustain and execute its task of donating because of the daily morning prayers contributions derived from other students as well as the contributions from members of the group.

Against that backdrop, he used the opportunity to request from likeminded organizations or groups to support their vision, as they are experiencing financial constraints.

Aruna Brima, one of the beneficiaries, expressed satisfaction over the kind gesture of the Applied Accounting Prayer Group of IPAM stating that it is not the first time they are receiving food items from the group and prayed for God’s blessings upon the group members for such a gesture.

Kadiatu Sillah, the Chairlady of the National Cotton Tree Disable Persons expressed her gratitude to the organization, stating how they received the same package from the students last year.

She said they cannot pay the group back for what they have done for them, but they will  pray to God to help them succeed in their academic pursuits.

Chinese Ambassador Takes IPAM Students Through What is Actually China