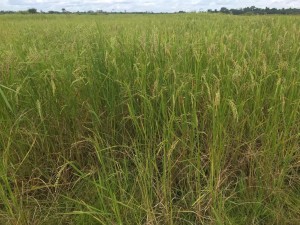 In a bid to support Government’s efforts to make Sierra Leone a food sufficient country, Jam Jay Agricultural Company Limited, has called on the Government of Sierra Leone and other relevant stakeholders for support in order to enable them harvest their 1200 hectares of land of rice at Malompoh village in Tonkolili District.

Speaking to this medium in an interview the Chief Executive Officer of Jam Jay Agricultural Company Limited, Denis Jusu, said that for the past weeks now they have been harvesting the rice, but said they are faced with a lot of constraints, adding that they rely on the people of the different communities to do the harvesting because the farmland is filled with water preventing machines from undertaking the task.

He applauded the various communities that have been helping him with the harvesting of the rice saying it is part of their corporate social responsibility as he cultivates 200 acres of land each in the four communities.

He called on Sierra Leoneans to engage in mechanized faming as such will help in making Sierra Leone food sufficient and reduce unemployment rate of the country.

He appealed to the Government to help him with combined harvesters in order for him to harvest the 1200 hectares land of rice as the farmland is very large and he alone cannot facilitate the harvesting adding that with the support from Government he will continue to cultivate such a farm. He reiterated that the farmland has been sponsored solely through his company’s resources.

He thanked the Ministry of Agriculture, Forestry and food Security for their technical support given so far to the company.

He ended by saying all over the world where food sufficiency has been attained it is as a result of Government’s grants and subsidies, adding that if all the expenses in the production of  agricultural food products are factored then the total costs will be very high.