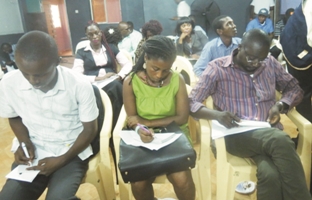 In the aftermath of a three-day workshop held on the 5th – the 7th March 2019, journalists from community and national radio stations in Sierra Leone established a unique kind of national network against trafficking in persons (TiP) in the country. Through radio broadcasts, the network will contribute to educate Sierra Leoneans on the identification of fake job offers, and report suspected cases of trafficking to the national anti-trafficking task force. The Communication for Development Workshop was organized through the Africa Regional Migration Programme implemented in Sierra Leone with funding from the US Bureau of Population, Refugees, and Migration.
The establishment of the network is the result of a three-day (5-7 March) workshop on Communication for Development (C4D) during which 27 Sierra Leonean radio journalists debated on the best practices to reporting and raising awareness on trafficking in persons in Sierra Leone.
According to the US Department of State 2018 Trafficking in Persons Report, Sierra Leone is both a source and destination country. Forced labour and sexual exploitation are the main purposes of human trafficking in and from the country.
Traffickers recruit boys and girls as young as nine years old from rural provinces to urban and mining centres for exploitation in sex trafficking and forced labour in domestic service, artisanal diamond and granite mining, petty trading, rock quarrying, street crime, and begging.
Some Sierra Leoneans, especially young women, are also coerced by sham recruitment and placement agencies, and then smuggled across international borders to be subjected to forced labour and sex trafficking primarily in Gulf countries.
During the debate, Mohamed Sajuma of Radio Mojcar said “This is a first step towards what we hope will be a long-term strategy to help Sierra Leoneans better understand the dangers of trafficking in persons.”
In her own contribution, Margaret Mansaray from Radio Bintumani, a community radio located in Kabala in Northern Sierra Leone, said that “This is the first time that such a network is established in Sierra Leone. I hope that it will be a place where we can learn from each other, and that it will foster good journalistic practices with regard to trafficking in persons in Sierra Leone,” said Margaret Mansaray from Radio Bintumani, a community radio located in Kabala in Northern Sierra Leone.
Sierra Leone recent history of civil war, Ebola and the closing down of operations of major iron ore mining companies in the country exacerbated an already dismal situation characterised by high level of joblessness. This appalling situation fuelled the scourge of trafficking in persons for forced labour.
“More than half of the youth population is unemployed so when an exciting offer, especially to go abroad, is presented, most young people seize it, often without checking its authenticity,” explained Sanusi Savage, Head of the International Organization for Migration (IOM) office in Sierra Leone.
“Young people’s desperation in the face of hardship often blinds them to the scams that permeate the recruitment sector,” Sanusi added.
Over seven weeks, the journalists will collaborate on the development and broadcasting of a seven-episode radio series to raise awareness on the risks and dangers of both domestic and transnational trafficking in Sierra Leone, as well as the methods for identifying and reporting suspected cases of trafficking.