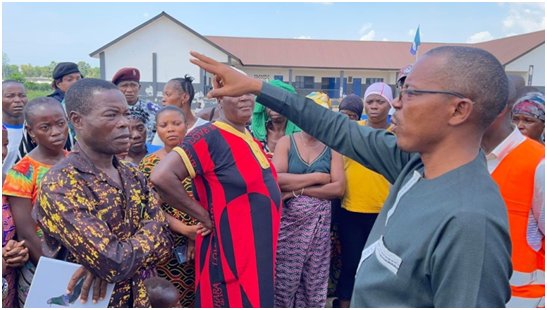 Dr. Turad Senesie, Minister of Lands, Housing, and Country Planning, on Thursday, November 10 2022, led a high-powered delegation of senior management and technical staff of the ministry to tour various locations in the Western Area Colony on a mission to acquire and secure land for the National Land Bank and to settle outstanding land disputes in that part of the country.

In 6 Mile for example, the Minister and his team swiftly moved to settle the long-drawn 2015 flood victims resettlement issues.

Some 232 family units had been living in deplorable conditions since the previous Government took them to 6 mile and abandoned them in makeshift single-room structures for each family. This set of Sierra Leoneans has been forced to share these single-room units with up to ten family members in some cases.

The verified list of 232 family heads was presented to the Minister on site and Dr. Turad Senesie wasted no time in directing the Director of Lands and Survey to immediately allocate some 25 acres of land to the affected families.

Also, the Minister further took immediate steps to secure the 23 acres of land that the State had allocated to a mission school which had been trespassed by land grabbers. The Ministry’s enforcement team immediately moved to demolish giant pillars erected by land grabbers and asked the school authorities to take full possession of their land and continue with the planned development of a secondary school, boarding home and hospital in line with the free quality education agenda of President Dr. Julius Maada Bio.

The entire community and its surroundings erupted into celebrations over the prompt and strategic actions of the Minister and his team with women’s groups and pupils singing and dancing with their “savior” for hours.

In 6 Mile also, the police unit deployed there complained to the Minister that land grabbers had dispossessed them of a piece of land that was identified and allocated for the construction of a police station.

The Minister asked the police to make a formal complaint while assuring them that he will not allow any land grabber to get away with trespass on state land.

The team then moved to inspect state land at various locations including Songo, 6 Mile, Garahun, First Step and Maparia.

The Minister was accompanied by his able Deputy Minister, Rev. Abraham Sesay-Jones, and senior management team including the Permanent Secretary and Director of Surveys and Lands.