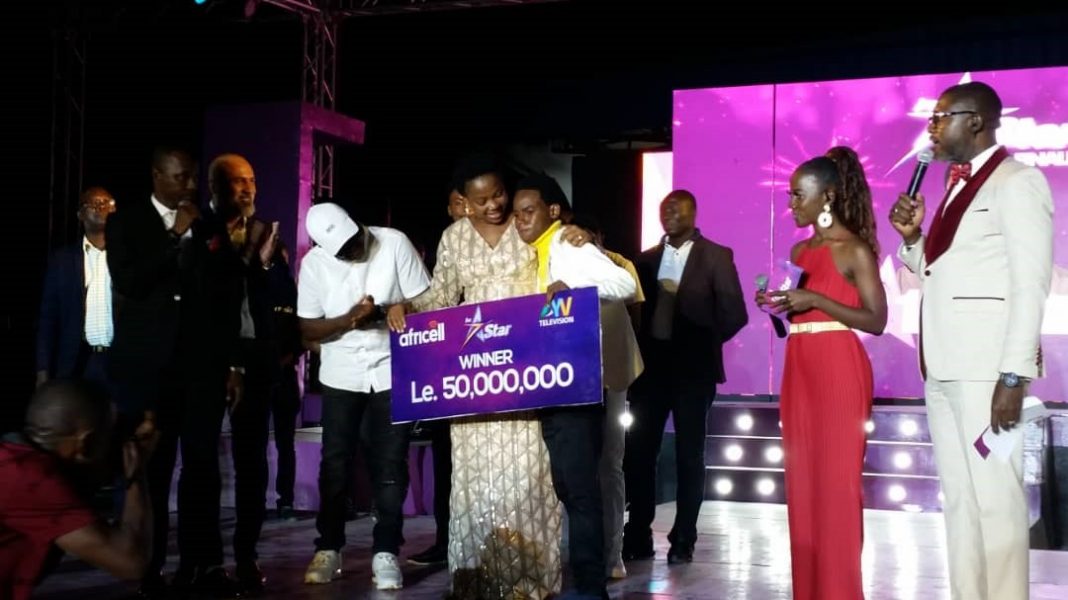 One of the mobile telecommunications companies operating in this country, Africell, in its efforts to give support to the entertainment industry in the country, enhance and unearth young talents, organized and supported the “Be A Star” show with the grand finale taking place on 26 January 2020 at the Fourah Bay College Amphitheatre and aired live on African Young Voice (AYV) television. At the end of the show Mohamed Larkson Sesay emerged the successful winner out of thirty-four (34) young people that took part in the competition. He scooped Le 50,000,000 as the winning prize.

Presentation of the ceremonial cheques to the winners was done by the First Lady of the Republic of Sierra Leone, Madam Fatima Bio. She commended Africell and AYV for the event, and appealed to them to continue the good work in empowering young people. She also presented a university scholarship to Sahr Andrew James, one of the finalists who dropped out of university in his second year. She called on Africell to create more stars.

Managing Director of Africell, Shadi Al-Gerjawi, commended the Management of Africell and AYV for their relentless efforts in making the Be A Star show successful. He added that the show started three months back with 34 participants but the young boy emerged the winner.
He stated that Africell always gives back to its subscribers and contributes immensely to the development of the country in sports, education, entertainment health, among other sectors, as way to empower the youth.

He gave assurance that the Be A Star would continue to empower and unearth young talents as Africell believes in nurturing young people to contribute to the development of the country.

Anthony Junior Navo, the AYV Chief Executive Officer also assured to continue to collaborate with Africell for the betterment of the country.

The Afri Radio Station, John Konte, who was the master of ceremony, disclosed that Moses Kargbo, Sahr Andrew James, Faith Kemokai, Rebecca Jawara, Mark Kamason, Christiana Freeman and Tracy Jac-During each has free data and free voice calls for a year and fully paid production of their songs, announcing that Osman Kamara one of the participants in Be A Star show from Milton Margai School for the Blind is a brand Ambassador for Africell.

Jimmy B also appealed to Africell to continue its good work of unearthing more musicians to develop the entertainment industry.

The winner of the Be A Star show, Mohamed Larkson Sesay, commended Africell and AYV in realizing his talents, and assured that he would always raise his head high.

The ceremony was graced by Africell’s Chief Executive Officer, Deputy Information Minister, among other dignitaries.