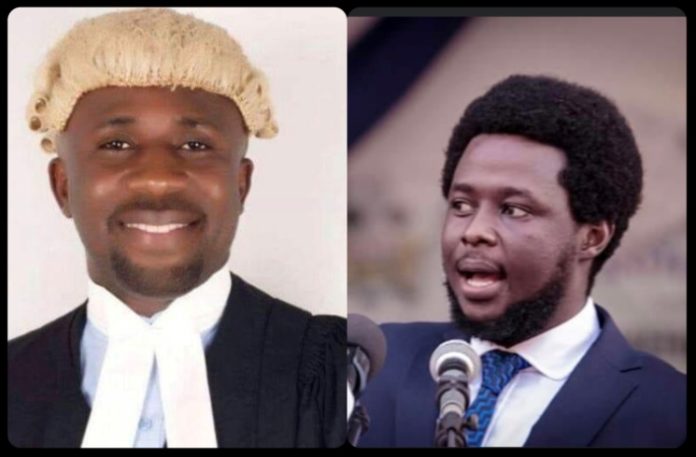 In an Advisory Opinion as expressed on the 8th April, 2022 , the versatile Executive Director of Legal Link, Lawyer Rashid Dumbuya intimated that as a former State Prosecutor of the Anti-Corruption Commission and one who is currently heading an organization that seeks to promote accountability in public life, he feels enthused to join in the national conversation as to whether the ACC should or should not investigate the PhD scam saga involving Government officials.

He stated that after having heard the ACC Commissioner’s position through an interview he gave in an international media outlet regarding his institution’s defiance to seize jurisdiction of such a public interest matter, he felt emboldened to write this open piece to not only educate and sensitize but to further interrogate attitudes and stereotypes that have the proclivity to undermine the glorious fight against corruption in the country.

Lawyer Rashid maintained that the ACC, under the leadership of Francis Ben Kaifala, has been exceptional in many respects to which he doffs his hat to the Commissioner and all the staff of the ACC for the outstanding successes and laurels achieved so far in the fight against corruption in Sierra Leone.

He continued that be that as it may, however, on this exceptional situation, he respectfully disagrees with the ACC Czar, whom he referred to as his brother, friend and colleague, over his defiance to not seize jurisdiction of the public interest matter that has impugned on the image of all academics in Sierra Leone and the nation at large.

The Legal Link Executive Director, who is also a Lecturer in the Law Faculty of the University of Sierra Leone, stated that his reasons are premised on his 11 points argument substantiated below.

He said the mandate of the ACC, under the 2008 Act and the 2019 Amendment is not just restricted to prosecution of corruption cases but also prevention, education and ensuring systems and processes review.

He said it may therefore  well be the case that the outcome of ACC’s intervention in the PhD scam case could have informed   recommendations for systems and processes review particularly on oversight institutions that regulate the academic environment in the country and not necessarily prosecutions.

“Such would have made a great difference at the very least to such academic and oversight institutions,” he expressed a view adding how to not investigate therefore means a lost opportunity by the ACC for systems and processes review on oversight institutions in the tertiary education sector.

“The broad definition may well cover issues that touches and concerns even fraud, racketeering, joint criminal enterprise, money laundering to name but a few,” he stated.

He continued that where it is clear that such activities are systemic and widespread and public officials/institutions may have also been involved, it may not be inconceivable or out of place for ACC to open up an investigations at the very least into such matters determining whether or not prosecutorial discretion may be triggered or not.

Lawyer Rashid argued that the ACC Commissioner should have been more progressive in defining corruption and not adopt the restrictive and orthodox approach.

Another point he raised was that the ACC should always allow an investigative report to inform their exercise of prosecutorial discretion and not the other way round.

He explained that as an Anti- Graft body, it is important to always embrace a strategy that is fair and objective when dealing with cases alleging corruption.

Based on his view, the most prudent tool that must inform ACC’s next steps in any case is an investigation report saying in the absence of such, the institution would always struggle in defending its stance for not seizing jurisdiction over cases reported to it by the public.

He highlighted that the practice of closing the door on public interest cases without any preliminary investigations done   amounts to ACC leading the evidence rather than the evidence leading them.

Lawyer Rashid added that whenever ACC closes the door on a public interest matter without first making an effort to investigate such allegations at the very least, such a move might be misconstrued by the wider public as selective and that ACC is attempting to lead the evidence instead of the evidence leading them.

He argues that such a perception is a disincentive to the fight against corruption and ACC must stoutly avoid going down that lane.

“It is the evidence that must always lead the institution and the ACC must be willing to follow the evidence through irrespective of who might be affected at the end,” he recommended.

He went on to admonish that the ACC should be dynamic, revolutionary and full of aspiration in the execution of its corruption mandate.

Anti- Graft institutions the world over, the Lawyer pointed out, should be radical, revolutionary, dynamic and full of aspiration in the discharge of their mandate to tackle corruption maintaining how they must never be afraid to dear the un-dearable and sail through uncharted waters to leave behind a trail.

The Legal Link Executive Director holds the view that the PhD scam case affords an opportunity for the ACC to have ventured on uncharted waters and leave behind a trail that could have positively contribute to the corruption jurisprudence the world over since the issue borders around a public interest matter.

He said sadly however, that opportunity was lost by the defiance of the ACC Commissioner to open up an investigation at the very least.

“The ACC is not a defence mechanism but rather a prosecuting agency of the State,” he said adding how it is important for the ACC Commissioner and the Commission to always remember the above mantra as they do their work.

“They are not a defence body and must therefore not be seen to be putting up defences prematurely for suspects or potential suspects that might come before them,” he underscored saying except if an investigative report informs otherwise, the ACC must always be seen making a strong case for having competence to dealing with a matter of public concern.

He also recommended that the ACC must allow the Defense lawyers of suspects or potential suspects to do the work they are being paid for and let the court serves as the final arbiter.

The erudite Lawyer stated that such a kind of strategy should  have been adopted by the ACC in the PhD scam case maintaining that  certainly, the Police may be conflicted in opening up an investigation that touches and concerns the IG, who is being alleged to have benefited from the PhD scam himself.

He said no doubt, the responses of the ACC Commissioner in the interview could be best described therefore as “putting up a strong defense for the suspects”…saying that is not the job of an Anti- Graft prosecuting agency with the greatest of respect.

Another point he raised was that the ACC is best suited to investigate the PhD scam and not the Police due to the fact that the IG of Police is himself alleged to have benefitted from the scam.

He said flowing from the preceding argument raised above, it is clear as crystal that the Police is deprived of competence to investigate the matter on the grounds of conflict of interest.

The Lawyer expressed the view that as a consequence therefore, the ACC could have been more justified to investigate the PhD fraud saga since the Inspector General who heads the Sierra Leone Police is himself alleged to have benefited from the joint criminal enterprise.

He said whether the soliciting and or accepting of the fake PhD degrees gave  the IG and all other beneficiaries working in the public sector undue advantage in their places of work could have been an interesting legal question worth pursuing by the ACC through comprehensive investigations.

Adding another point, the Lawyer said the probative value and public interest considerations of the ACC investigating the PhD scam case far outweighs the prejudicial effects of not investigating.

“No doubt, the potential harm that this fake PhD scam may have on academics, students intending to study overseas as well as the nation’s academic standing globally makes it all the more justified for the ACC to have seized jurisdiction of the PhD scam case bringing out strong recommendations that could have served as a deterrence,” he said.

He said  in this given instance case, because  private and public officials and or institutions were alleged to have been involved, it could have been quite easy for the ACC to establish jurisdiction over such a matter.

According to him, Section 97 of the ACC Amendment Act of 2019 justifies ACC’s intervention in the said case on the grounds of Presumption of Corruption.

He argues that the involvement of many Government officials in the PhD scam could have been the very reason for ACC’s intervention in the case on grounds of Presumption of Corruption.

At the very least, he claimed, ACC could have hold the presumption that the alleged beneficiaries enjoyed undue advantage in their places of work as a result of the conferment and/or acceptance of the fake PhD degrees.

He said the burden to prove otherwise rests on all suspects and those alleged to have been involved in the PhD scam and not the other way round as opined by the Commissioner during his interview.

In his opinion, the ACC has in time past opened up investigations on similar related cases of fraud, the use of fake degrees and certificates as well as Anti-money laundering activities.

He said without any iota of doubt, there are enough precedents before the ACC showcasing that the ACC has in time past opened up investigations at the very least on similarly related cases of academic fraud, use of fake degrees and certificates and even Anti- money laundering activities. It is for good reasons why corruption is dealt with under the criminal law because it shares a lot in common with other fraudulent activities.

“I could still vividly remember the case of one PhD foreigner appointed by the Government to head an academic institution whose academic credentials and degrees were rigorously investigated by the ACC when alleged to have been falsely obtained,” he gave an instance.

He also made reference to the poor teachers that were paraded under the cotton tree in Freetown with indictable placards because of allegations of their involvement in exams fraud and malpractices. Asking rhetorical questions, he said: So why the deviation and inconsistently now by the ACC ? Why the outright departure in not following precedents in this given case?

Lawyer Rashid said as an integrity institution, the need for consistency and predictability in following precedents both in investigations and/or prosecutions cannot be overemphasized.

In concluding, the Lawyer said from the above points raised, it stands to reason therefore that strong arguments exist as to why the ACC should have seized jurisdiction of this public interest matter and at the very least make strong recommendations for systems and processes review where criminal culpability could not have been established. He noted that the probative value of investigating far outweighs the prejudicial effects of not investigating.

He emphasized that the ACC is indeed a relevant institution in post conflict Sierra Leone and that Commissioner Ben Kaifala and his dynamic team in the ACC have done well in sustaining the fight against corruption amidst the plethora of challenges at hand.

“Therefore as a valued partner, I pledge my unflinching and continued support to the ACC in ensuring that the institution continues to upholding its core values as it wages war against corruption in Post conflict Sierra Leone,” he ended.